The Uboat started out driving the 50 miles to Braindamage Island and picking up the two other passengers.  JP the Photographer and JT the Creative Director, add in the Journalist, Count Ferrari and you have the population of our moving road trip going to Austin NV.

We ended up at the Dalles in OR.  We are at a ShiloInn.  Very nice.

We took the road over Cayuse and Chinook Passes which had great vistas of Mt. Rainier.  We stopped at the top and had crab that Joe had caught and cooked the previous day.  That was a great lunch.  Then in Yakima we had a couple of tacos at the taco bus.  This will be tough to beat.

Then down to the Dalles and disc golf at a great course in a very nice park overlooking the Columbia.  That was 6:45-9:00 PM.  Dinner was salads for all at 9:30 just inside of closing time.

JT found a disc and called the owner but got some French recording.

JP did a Priceline.com thing and we got the Shilo for $100 plus tax but he lost the receipt so we will not believe anything he says and figure JP will cover the cost.  He says the tax was $18 off his internet pages, but the question is.... Do we believe him?

It was 97F most of the day yesterday and the Uboat was a heaven of AC.  We were able to access all of our stuff an cruise in comfort.

Today we are going to go by Crater Lake and end up south of there somewhere.  These guys have not seen it yet.

We have a point system and so far JP is +1, I am +1, and Joe is -2.  Explanation later for this system.
The trip went from Seattle, to the Dalles,OR, to Klamath Falls,OR, to Susanville,CA, to Fallon NV, and finally to Austin,NV.

We found Crater Lake at 7000 ft was a bit cold and windy but magnificent.

We played disc again in Madras OR on an excellent desert course with 9 holes.  Joe won again but will now be playing with a par 4 instead of the par 5.   JP also plays with the par 4 so now they will play head to head.

The mileage on Day 4 started in Susanville and we found many roads that were dirt and potholed.  There was a bit of rain as we drove through Lake Tahoe so the car started to get trashed a bit.  Tahoe was crowded.  We did turn around on one to find a paved alternative.  JP tested his Go Pro on the hood for the first time.  Moderate success.

We had lunch in a small town of Slaterville (?) with fresh BBQ pulled pork in a salad for CF.  We fueled up with 91 octane and headed out the wrong road which totally took us away from Joe's destination of Nevada City.

The Uboat (enroute to Fallon and to kill some time) did end up on some 'scenic byway' that was dirt and had a company that does destructive quality control for the military.  They specialize in mostly the Marines but do stuff for other services too.  Most of the staff are ex-military.  An example is to take a tank to -50C and see if it still works.  There were several tank shells in the field.

We got to talk to an HVAC repair dude who told us it was coming up and a bit about it.  We got there after 5PM, closing, but were able to talk with one of the project engineers and a security guy.  Both were great and very forthcoming.  They even have a test track, like a Nascar track, where they do high speed testing.  The company also sponsors a race car and uses that track for practice.  The company is on 3500 acres and away from anything but kind of near Ft. Churchill.

Ft. Churchill is a park with some buildings without roofs or floors.  The wood parts are long gone but the 2' thick walls are still standing for the most part.  I am guessing it was part of the Indian wars?  It is located on the path of the Pony Express as was the QC company (Quality Control).

We are on day 4, a Friday as this is being written.  Fallon NV in a  Best Western that actually had a room with 3 queen beds.  Cost was $91 including a reasonable breakfast.

The experience with hard water here in NV was a new one for us.  Soap just doesn't rinse off easily.  I suppose hard water is better than no water.   Joe noted this is the best shower pressure and head we have found so far.

We will be provisioning for a day in the desert today.  All the UV clothes will be tested along with sunblock.  Count Ferrari will be shod with running shoes, denim pants, long sleeve UV shirt and a big sun hat while trying to get a ride on a wind machine.  His companions may have him beat for car speed on the road, JP= 135 MPH, J = 110 with CF at 100, but the experience in sailing at speed will assist CF in getting and keeping a new sailing personal best speed record.  In excess of 35MPH is the goal.

A great article on the history of Land Sailing is found here, click to go. 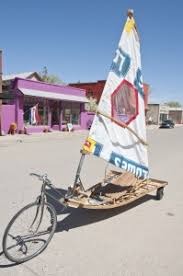