Cars owned by Count Enrico over the years.

On this site you will find, in a somewhat chronological order, a listing with photos (of sister cars) of the cars I owned and operated from 1966 on.  Enjoy.

I selected photos that were as close as I could find to the car owned.  Color, not condition, was the main determinant.  Mostly these cars look to be in better shape than any I owned.

1956 VW bug, my first car.  My dad gave it to me after I banged it in reverse taking off hard and it was stuck in reverse.  'It is all yours' he said.  The shifting part was $2.73 and the engine and transmission had to come out but was VERY easy!  Back on the road in less than a week.

36 hp, roller gas pedal, small back window, a veteran of camping with 6 people and a boxer to Iowa and back!  No fuel gauge but a reserve tank switch. 6v.  Very dependable! 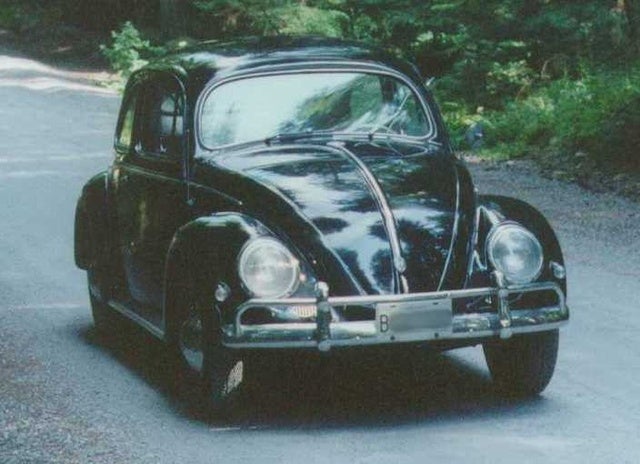 1958 VW bug with sunroof, bunged up frontend which helped jumping and going up steep hills in the gravel pit. 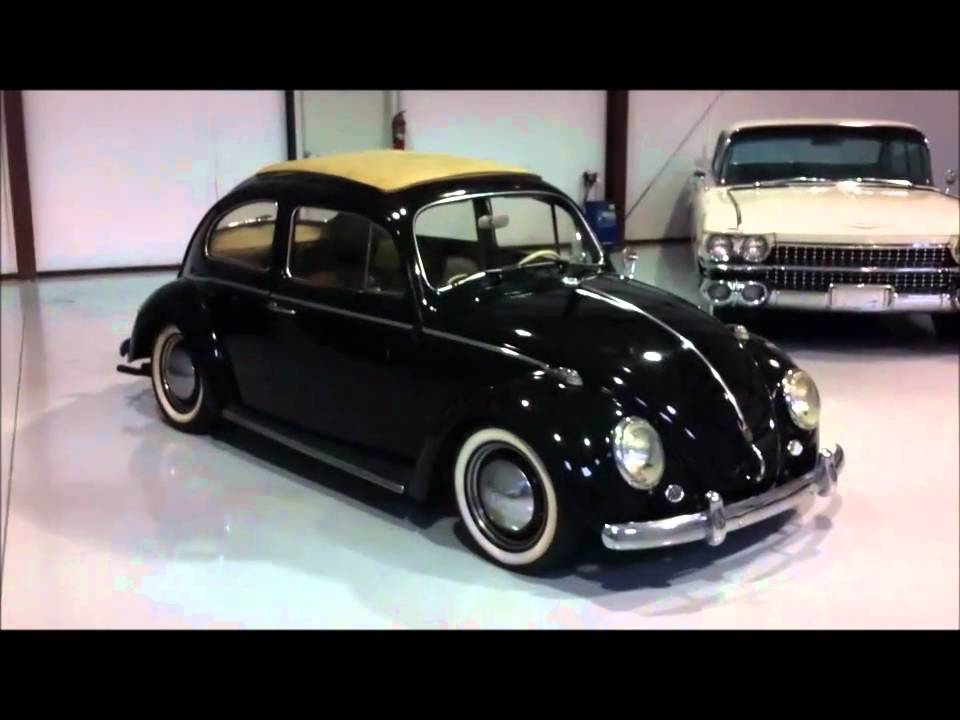 1962 Falcon station wagon (parent's car but it made a LOT of miles with the boys)
Ours was all baby blue but otherwise much like this.  170 cubic inch straight six with a 'three in the tree' manual transmission (that means the shifter lever was on the column).  The really cool thing about this car was the electric back window that would go down with a switch on the dash or with a key in the back lock.

1956 Cadillac limousine, picture it in gold with a totally dented right rear quarter.  A real beast!  Getting turned around at the Canadian border was a highlight of the ownership.  A bunch of hippies trying to go north were refused entry and then got fined at the US border which we had to recross to get back. 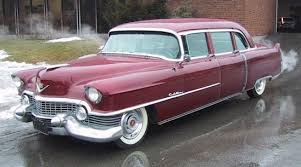 1955 Austin Healy 100-4, Perhaps the best looking car I ever owned.  Rarely ran although a complete engine rebuild by me (not knowing anything) and it coughed a bit but never really did it's thing.  My dad had a 1955 100-4 Le Mans model with the all aluminum body!  The photo car is about the correct color.  Mint green.

1958 Cadillac Coupe de Ville, I wished I owned one this nice.  My own was identical to this in color but was a bit dinged up with a suspension that had the front end 3/4" off the ground and the stern about 18" off.  The air suspension was a bit tenuous.  Fast car though!  Burn outs in the high school parking lot!  Not much muffler left on it.  I would take another now, in a heart beat, for a sunny day cruiser.  As I recall the wipers were vacuum run and suspect to slowing down when you punched the fuel....  Not a great feature for a leadfoot in Washington state.

1958 Cadillac Sedan de Ville, this car was a college owned unit.  It was missing a couple of the forward gears, maybe 1st and 3rd?  The wipers didn't work either unless one pulled the line I rigged up on it.


1960 Triumph TR3 One day of ownership.  Not sure why it was so brief.  Loved the cut down doors. 1/6th of a Milk Truck  A consortium of high school ski bums tore it apart inside and tried to install an interior.  It never moved under it's own power as I recall.

1959 Hillman delivery wagon:  Grey,  no shocks in front end, could do a wheelie if bounced in 1st gear! 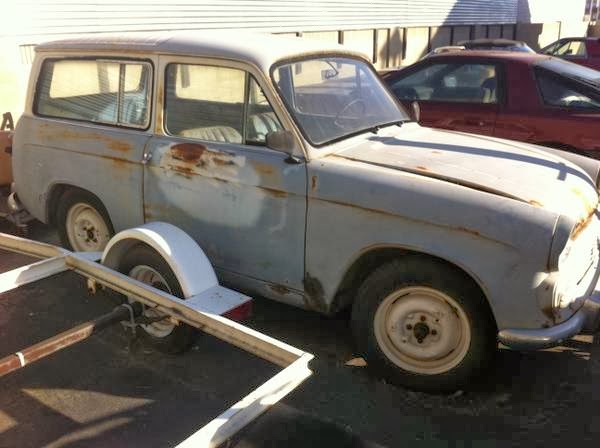 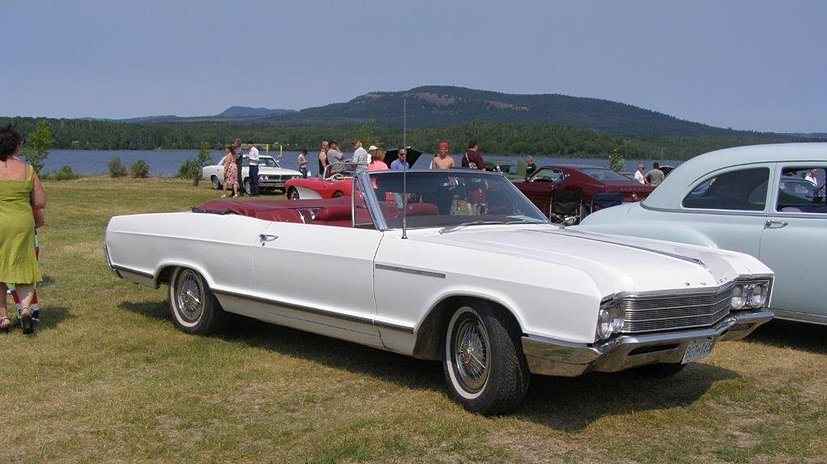 1967 Saab Monte Carlo, 3 cyl., 2 cycle engine with oil injection, free wheeling transmission with a  4 in the tree.  Picture it in grey and you have the image.  It was a great car for rallying in the dirt!

Purchased from Norm Savage in Kirkland.

1968 Peugeot 404 Leonardo was it's name as fitted the lion logo on the front and steering wheel.  It was my going back to college car.  It even got to run in the autocross in 1976 that was set up for the SEED rally.  I was the designer of the course and had to test it.  The 4 in the tree shifter was fun!  It was a very comfy car. 1965 Pontiac Catalina station wagon (Plumbob)  This ride, purchased from a Mercer Island resident who shall remain nameless for $300 was probably the best car I ever owned.  It did everything I ever asked it to do, including a ski trip to Utah over the Blue Mountains in 12" of fresh snow. 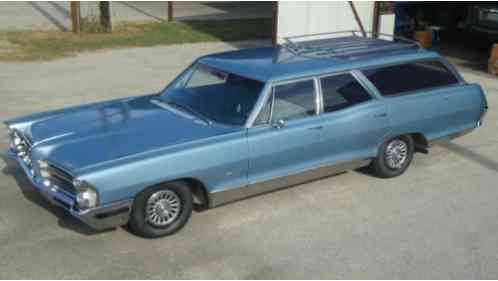 1964 Pontiac Wagon (car that took the engine from Plumbob)

This was our first 'farm truck' when we moved to our 5 acre horse farm to be.  It worked hard, hauling everything.  Often too much in the bed so the wheels in the front were barely weighted.

1972 240Z Datsun (Pegasus)  This might be the most attractive car we ever owned.  It was certainly the most expensive at the time. We loved this car as it had style, speed, and was fun to drive.

Tune ups would last for around 10,000 miles and then the points and valves neeed adjustment and the carbs would like to be tuned together again.  It was touchy that way.  I had a straight away I tested my tune ups on and if I was getting 105+ mph from sign to sign, standing start, then I would claim it tuned!

Went on a road trip with this car and my father to a Colorado family reunion.  I went to sleep for an hour and woke up 100 miles down the road!  He liked driving at speed!  We must have slaughtered 100 jack rabbits who insisted on waiting to the last moment to try and cross in front of us in this one valley. 1980 3/4 ton  Chev pickup We called it Scotty as it was a Scotsdale package.  It had a kick ass motor but a turning radius that was just insanely large!  Very unhandy.  We were glad we bought a warranty on it from the used car lot.  It had a broken frame they had to reweld. A gorgeous car but the front tires kept spraying the windshield and sides of the car with mud.  Sucked big time!

1986 3/4 ton Custom 20 Chev Suburban 4x4  Bought from the US Surplus through a bid sent in by snail mail.  3 months later I got a letter saying my bid for $6002 was the winning bid and I had to go to Arco Idaho to pick it up.  The truck had been used to winch ground water samples and had a winch in the bumper and one in the back (left mounting holes).  The feds had kept the winches but left 1/2" of dust inside for me.

After driving it home, we had an Earl Shibe paint job put on and had the front seat rebuilt.  We named it NUKE, short for Nuclear Droshka.  It ran like a top the entire time we owned it.  The manual door locks were too hard to open (it was too far to reach!)  and close so after a few years we moved to the 1999 unit owned at this writing.

Once you go Suburban, you never go back! 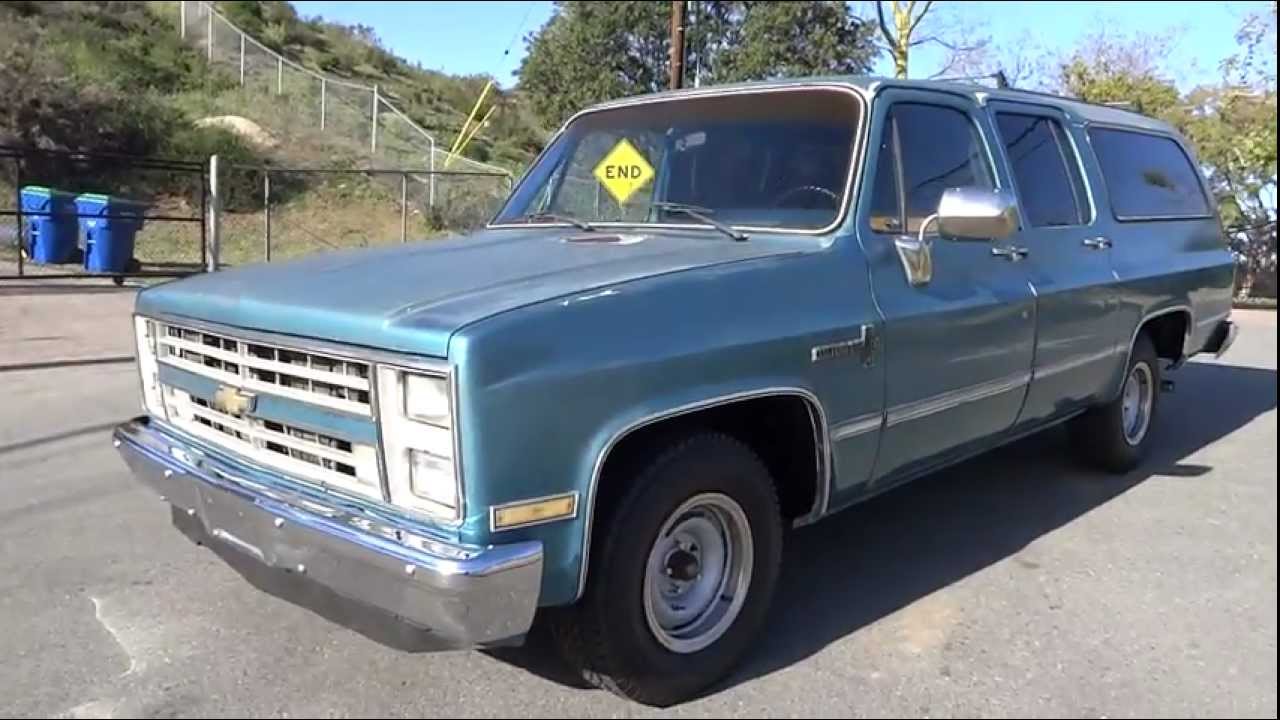 Not particularly economical but it does usually go over 20 mpg and has done 25 mpg on the freeway with the cruise locked on about 75 mph.

Cars below that I lived with and drove occasionally.  Cars that were the 'girl's'.

1968 Opel Cadet B Rally
It was driven without the clutch for months.  Very cute but the 1100cc motor was pretty light on horsepower.  Used as a commuter from Kirkland to Seattle 1972 240Z Datsun (Pegasus)  (We argued over whose car this really was, that is why for sake of harmony I put it in this list too.)

This might be the most attractive car we ever owned.  It was certainly the most expensive at the time. We loved this car as it had style, speed, and was fun to drive.

Tune ups would last for around 10,000 miles and then the points and valves neeed adjustment and the carbs would like to be tuned together again.  It was touchy that way.  I had a straight away I tested my tune ups on and if I was getting 105+ mph from sign to sign, standing start, then I would claim it tuned!

Went on a road trip with this car and my father to a Colorado family reunion.  I went to sleep for an hour and woke up 100 miles down the road!  He liked driving at speed!  We must have slaughtered 100 jack rabbits who insisted on waiting to the last moment to try and cross in front of us in this one valley.

1982 Maxima Datsun 4 dr.  (Talking car)  It had the same motor as the 240Z but with fuel injection.  We replaced our 240Z with this car.  A warrior of at least one road trip to San Diego.  "Fuel Level is Low" was a good thing to hear when cruising down the I-5 and not paying attention.  I recall it getting about 15 MPG at 85 MPH.

1997 Saturn SL, purchased brand new for the girl.  Our first 'new' car.  We always thought we would never buy a new car or an American car and then we purchased this new American car and had fun with it for over 100,000 miles.  Burning oil by then a bit, but with the 5 speed it was fun to tool around in.  Even took it in an autocross!  Will look about for the video of that.

2004 Infinity G Coupe
Can you have a car that is too fast?  This one would be.  It corners like it is on rails and likes to zoom!