The Spring gathering to the GHEDI (Griffin Hill Equinox Disc Invitational) of disc throwers in the Pacific NW can be  a very adventurous group.

(For best viewing of the photos, grab the slide bar at the bottom of your screen and center up the first photo, then scroll down and enjoy.  There has been some issues with photos not downloading so maybe try Edge or Chrome browsers if one is not working)

If anyone who attended has more photos, send them to me for possible inclusion.

Historical Note:  This is the second GHEDI with snowfall.  It last happened in March 18, 2012 where we had similar amounts of snow and it melted off by the end of the day leaving a muck as did this snowfall.

The snow started at 6:30 AM and by tee off time for the 21 hardy souls invited and accepted for the GHEDI (11th year) it was 3-4" deep in the pastures.  The precipitation started and stopped with blue clouds and sunshine for a lot of the day.  The ground just turned to water and mud!

When playing in the bottom forest, grenades were going OFF (As in BOOM) as the snow fell from trees in LARGE snowball sizes.  In one group containing the Scorekeeper, there was some skullduggery.  He was thinking the others in his foursome were throwing snow balls at him when it was just the trees dropping bombs.  After his comment, his foursome partners started throwing snowballs at him and he was just pelted but didn't realize some of that was man made missiles!

Here is a shot with a big blue cloud in the sky that was not unusual.  On and off weather all day!
The snow on the ground was melting fast and created a VERY wet footing.  Sometimes 3" of water, especially in the world's largest disc golf tee box! 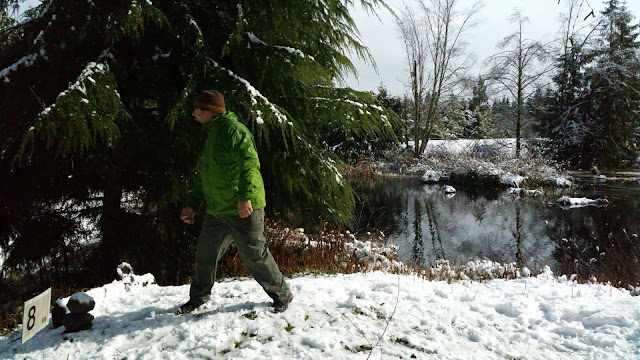 The players dressed for success.  Here is The Miller just after teeing off on 8.  His outfit with waterproof feet, pants, coat, and hat was very typical of the well dressed player.