Riding on an AC45 in San Diego Bay:

Who gave me the ride:


Energy Team, from France is my new favorite team.  Their karma, because of the ride they gave me, was enhanced.  They were second in the Match Racing and 3rd in the Fleet Championship Race in San Diego, during this third venue in the ACWS.  This was their best performance to date.


Below is a great illustration of just what the new (2010) AC45 looks like and the sizes of the various components.  These boats are the warm up designs for the America's Cup (AC).  There is a series of races to be held around the world to incite interest in AC racing.  This series is called the America's Cup World Series (ACWS) and teams that would like to challenge for the AC are using these boats to practice strategy and technique on a less expensive platform than the 72' AC boats that will be raced in starting in July of 2013 in San Francisco.  The speculated cost for a 72' boat is approximately $10 million, to be individually designed and built by each team.


The cost of the AC45 is just under a $1 million.  They are all built by Core Builders in NZ and are all rigged as one design boats.  The headsails are the only modification allowed for experiment.


During the Speed Trial in San Diego the boats were clocked at 26k!  That  was in a 20-22k wind range.  They are very fast and demand crew attention at 100% or one goes swimming.  As evidenced in Plymouth, England, the capsize possibility really goes up when the wind goes over 20k.  The bows can dig in and if technique is missing or a line fouls then the fall from the platform can really bum your day. 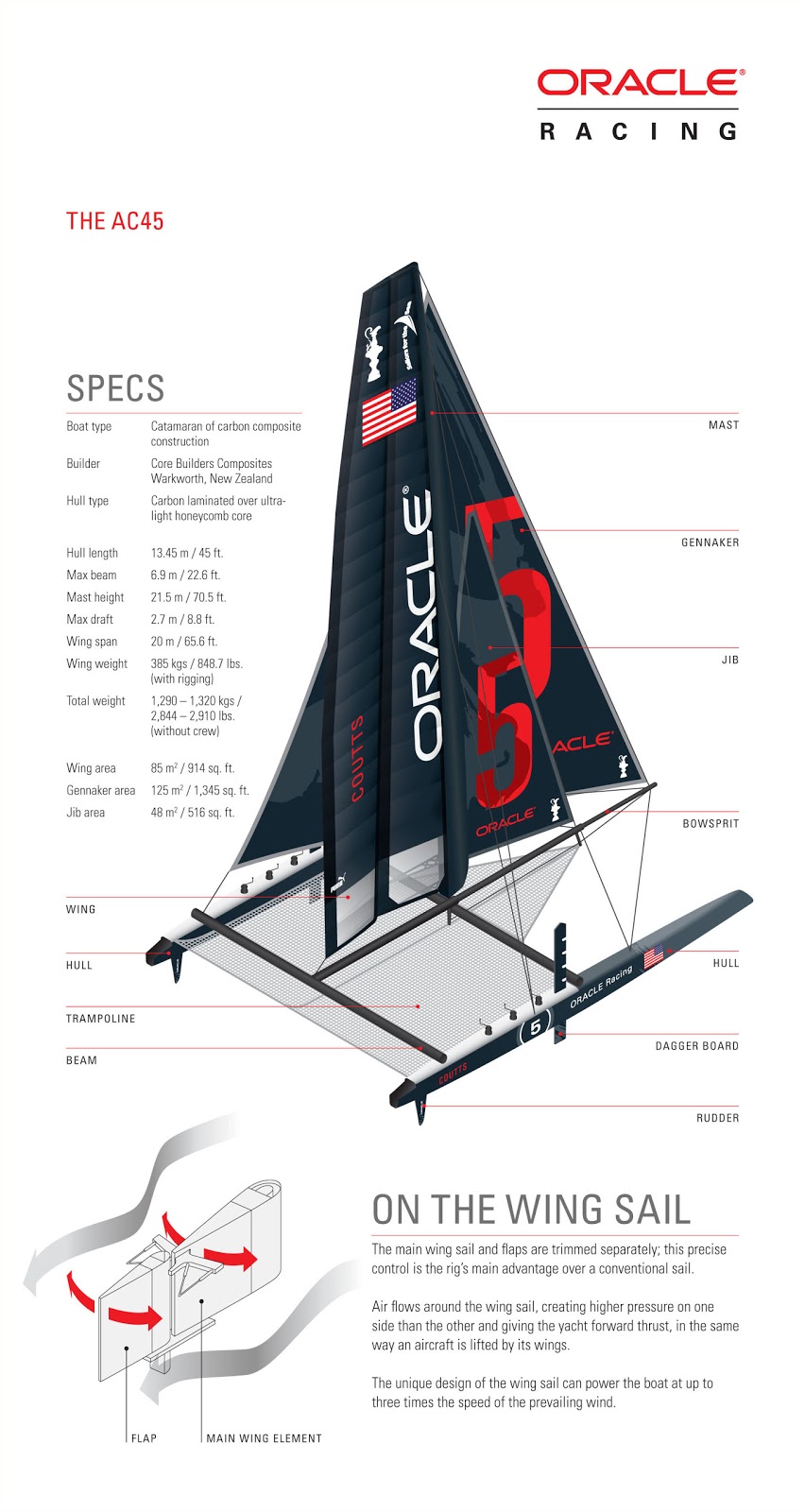 How to get a ride.

As press representative for the famous Scuttlebutt newsletter, I had been walking around the various tent areas where 4 teams were based just outside the media center.  My modus operendi was to walk in like I owned the place and ask for the media representative.  I met all 4 of them. From each, I learned bits and pieces about the ACWS.  I also put my name in for a 'guest' crew position with each of the 4 camps with 3 other camps on the Midway pier still to explore.


It paid to get to the venue early and get into the camps and ask up front.  Access was limited to the camps but having press credentials and being there before security ramped up really helped.


When I talked with Alexandra Peyron, media rep. for Energy Team, she asked me if I could go out that day!  Who could say no to her?

I was introduced to Yann Guichard, the helmsman for this venue, and a couple others as they were talking about the plan for the day.  The conversations were mostly in French and my high school training in that language was not up to speed.  I could tell some of talk was strategy with hand gestures showing two boats in various approach situations.
Yann was helming for Energy Team on the final race in Cascais, Portugal. LoïckPeyron is the usual helmsman and skipper, but he is currently waiting for a weather window with Banque Populaire V for the Jules Verne Trophy, the ultimate record attempt around the world on one of the biggest and fastest trimarans in the world.
The team provided me with matching foulies, flotation, and helmet as soon as the crew finished lunch.  We boarded with me going with the support team initially on the rocket fast tender/tow boat.

The  boats exited the moorage harbor between the Broadway Pier (Media Center) and the Midway aircraft carrier pier.  The AC45 in tow behind the big tender.  We had 4 support persons and several sails aboard the tender plus myself.
When the 45 had hoisted the headsail, using a zipper around the forestay to form a tubular luff, it was time to load the 'guest' aboard.  I didn't embarass myself as I grabbed the very small and smooth coated shrouds while stepping aboard my first AC45.  It was fun bouncing over the net and dodging all the control lines to get back to my stern perch.
The conditions were very easy.  There was glassy water with variable winds from 0-8k so the transfer and settling in was a piece of cake.  However, the perch was a bit spooky to be on.


Aft of the aft cross beam there was a tiny space to sit on one's knees or recline to one side or the other.  A grabline was provided for the guest.  That is the extent of the safety and the so to speak 'seat' was hard to get comfy on.  The 'guest' position is aft of the aft crossbeam with about 12" of spectra net to perch on.  The net cut into my knees through the foulies and pants and really was uncomfortable on my bare hands.  Falling off the back end was a very real hazard.
I was instructed to be very careful to not touch a magic box in the cradle of the 'horn' with all kinds of wires running in and out of it, it was on my port side.  On my starboard side were the running backstay end and some light spectra shrouds supporting a camera pole that the team had installed to monitor training.   (cameras are actually already installed and fixed on each of the AC45 at all times for video capitvation, along with microphones on each of the crew member’s life jackets)

During the races all of these boats have to have either a 'guest' or 100 kilos of weight so my 200lbs was a bit under the required amount.  My 6'4" old body was shifting during the entire 2 hour practice sail to find a comfy position.
The speed of the boat and all the amazing technology with the wing and controls kept my attention off my discomfort.  As an old 'lead mine' sailor for the past 40 years, it was the exhilarating change between what I was used to and what was now required.  We were flying a hull in what seemed like no wind.  What a machine!
Energy Team was one of 7 (but 9 in total)AC 45s on San Diego Harbor that day, along with many pleasure boats and navy boats, and commercial boats.  The recreational sailboats were mostly just bobbing up and down in the no wind situation while we would be going at minimum 5-6 knots and flying a hull at up to 14k or so.
The experience for me was verging on unreal.  When the call came for me to transfer off and back to the support boat it was as if the two hours were a single minute.  Absorbtion of what I saw will take some time but now I have seen the controls at work and understand somewhat the crew positions and actions.  These boats are just amazing!  The fences all around the village proclaim "Best Sailors" and "Fastest Boats".  They might just be accurate!
There were many observations to be collected and compared to my old race skill sets.  The boats are way different in many ways from anything else I have seen.
In terms of instruments the helm position had a small screen readout but Yann didn't even glance at it.  The box can provide any or all information any yacht ever had but finding the time to look at it would be tough.  There was no Windex at the top of the mast, just telltale tapes all over the huge wing and on the luff of the full battened headsail and code 0.
The sailors just read the water and the winds based on skills and experience.  Time on water will be one's friend here in this lighter wind venue.
These races are being held in waters that can be seen from the shore easily.  They are calling it 'stadium sailing' and this venue will deliver views of the course that will accomodate huge crowds from multiple locations around the course or from the coverage off the internet.
There are three helicopters with TV cameras circling for each race.  Two of them down low with a big camera hanging off the bow and these two take the individual boat shots and close in shots while one is higher getting the full picture of the race course.
Apparently, the courses are controlled from the land and adjusted depending on wind information.  Instructions go out to the committee boat, mark and gate boats to adjust to a given coordinate using GPS that is accurate to 2 cm.  The GPS units are reading information from both the Russian and US satellites and are accessing a minimum of 14 satellites and up to 22 satellites.


Photos by John Papajani and Count Ferrari
Posted by Leisure Log at 2:59 PM