Departed home @ 9:15 drove the 50 minutes north and arrived in Anacortes, loaded the boat with luggage and left the dock aboard Jah Mon at .

This island is the furthest north island in the San Juans.  We motored, sailed and motored arriving  around 16:00.  There are two state maintained mooring buoys there and no one else when we showed up.

We deployed L’il Mon and discovered the fuel bulb had deteriorated over the winter to junk.  The new fuel additive of ethanol rotted it in less than 6 months.  We had to row the three of us to shore.  Not too bad in the sun and flat water.

We took a hike over towards the lighthouse and discovered a concrete path that runs from our bay all the way to the lighthouse.  This is a remnant of the WWII infrastructure.  This feature is totally unique in the entire San Juans.  Additionally, the lighthouse had been restored in 2008 and has  a historical write UP and photos that one can view through the windows.

We had a great salmon BBQ dinner, played some cards and went to bed.  We were all woken around 2:30 with big wind and big waves moving us all about.  The wind was intense with Count Ferrari speculating on the 35 range.  The huge white caps were visible just outside the harbor but ended up coming inside as big swell moving the boat side to side and pitching on the mooring buoy.  The wind was whipping straight into the harbor.  There was very little sleep that night and thought were abounding, should we move?

Moving in the middle of the night is always tough and things can go wrong easily.  The Count decided to ride out the evening and in the AM the wind started to abate.  By 8:00 we slipped the mooring and motored dead to weather and out of the bay into 20+k winds.  We turned left and deployed the 140% headsail and took off south.  There was a 3k tide taking us directly south.  It was lovely and smooth.   The wind and water just layed down to nothing in the next 7 miles and 5 hours.  Motoring was required to get us into on . 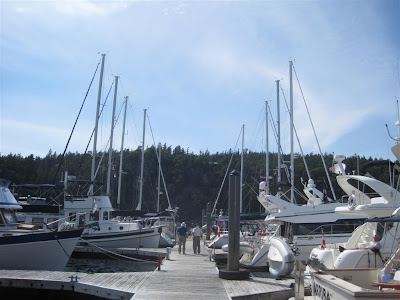 It was fun seeing old friends and wandering the dock at .  They have nice wide docks and clean showers and restrooms.  This dock is used by the local islanders to load UP groceries and other essentials into their work boats to transport out to the island that are not served by the State Ferry System.

Beautiful weather made us all happy!

In the morning after a blessed peaceful sleep in NO wind or wave. A group of 5 of us walked the scenic trail the end of road.  We passed by all kinds of gorgeous houses and a buffalo farm and other fabulous places built on the edge of .

They all arrived by Friday’s ‘Appy Hour’ where we all shared appetizers and socialized on the dock around the picnic tables.

The revelry went on well into the night and dinner aboard Jah Mon was reduced to awesome quesadillas as we thought we should eat something substantive in addition to the multiple awesome snacks served by each boat.


Gorgeous blue skies and sun again made all the informative programs even more interesting.
Seminars:

Whale Talk:
There was a talk from two Orca experts about the local pods and their habits and the regulations on how to act when the whales approach your boat.  This was put on by The Whale Museum in Friday Harbor (800-946-7227) and the two presenters were very knowledgeable.


Winch Maintenance:
Count Ferrari serviced one of his main winches on Jah Mon with several boat owners watching.  This maintenance is  recommended for every two years if racing and 3 if not.  One of the pawl springs was broken and replaced.  It was discussed that most of the owners do not do this often.  Just do it and have fun but don’t touch anything until done to keep the grease where it belongs. You will have grease all over your hands.

Estuary reclamation:
Rachel gave a 3 hour talk and walk about the 60 acre lagoon/estuary and surrounding fields with Fish Trap Creek feeding it.  Contact info if interested in hearing more:

Fire Safety on Boats:
Fire Chief and Inspector Dave from Everett Fire Department came and talked about fire safety.  He mentioned watching the AC part most closely.  IF the cords or ends are warm or burned, buy new ones!  Boat fires in a marina ?  Send the unburning ones away, do NOT push the burning one out as the fire cannot be fought out there.   Also suggested were smoke alarms in the sleeping cabins and possible CO monitors.  Be sure and shake UP your fire extinguishers annually.  Check them to see if in the green zone.

Saturday Pot Luck:
All the boats brought too much amazing food to the dock tables and we all ate way too much.

We were the third from last to depart.  Others had chosen times that went with the tide and destination.  Our destination of Eagle Harbor on Cyprus Island was only 2.5 hours away so no hurry.  The weather was overcast with a light bit of rain coming and going but no worries with our roof UP.

We pulled into the harbor and found two other boats on moorings the DNR has deployed.  Many of them are too shallow for our 7’ draft but we found one with plenty of water under it and immediately launched L’il Mon (our 10’-3” hp floor Zodiac with a 10 hp Mercury).  It only takes Bling and Count Ferrari 15 minutes to get the dink off the deck and outfitted, ready to go to shore.

It was near 3:00 PM and we noticed a bit of smoke on Guemas across Bellingham Channel.  The smoke seemed too dirty for a slash fire and we also heard sirens.  More on this later.

There are walking trails galore on this island and not much else.  We got to the nice steep graveled landing area and consulted the trail map.  Our goal was to walk UP to Eagle Bluff so we could look out over the San Juans.  A 2-3 mile round trip walk.

The rain had stopped but by the time we had made most of our elevation gain it had restarted with a determination.  The Countess had been leading the walk to that point but had discovered she had wet legs from all the wet underbrush on the trail.  She chose to be 2nd after that.

We returned to the boat in a good bit of rain.  We had to shed our gunked up shoes off prior to loading in the dink.

That night we watched the fire on Guemas Island fully engulf most of an 11,000 sq. ft home with apparently 100s of people trying to get the fire under control.  A very spectacular fire.  It was good the rain was coming down hard!

We motored and motor sailed home the 1 hour to Anacortes Marina and were off the boat by 12:30 and heading home.  We were sure tired even though there was very little work beyond moving dock carts UP a stupidly steep ramp to get the bedding, dirty clothes, and some leftovers back to the car.  As usual, it was good to get home and with a new set of good boating memories.