NOTE:  This site is under construction.  Come back in Mid May for complete idiocy.

"One must do, to be leisurely"  Coach Koci

A discussion of leisure during our weekend cruise to the island park of Sucia came UP with the above quote.  Doing 'nothing' might seem attractive to many who try and do too much during the day or week while working or dealing with life, but the truth is one feels much better when doing an activity that engenders relaxation as opposed to vegging on the couch.  As a self styled Leisure Expert, Count Ferrari supports exactly that attitude towards a lifestyle.  Do you know anyone who does it better?

Of course, there are many components to leisure.  Some like to hangout on their own finding that in solo company  they discover the one they can abide by.  Others are more social and look for playmates.  If so called 'playmates' are wearing bunny ears, so much the better.  A successful association of social interactive playmates requires a good attitude on all the part of all parties.  A good attitude could be defined as open to new activities, polite and respective of personal and emotional space, willing to pitch in for the common good, and show up with a smile.  Attitude is Everything.


The Cruise to Sucia:

Where in the world is this odd named island?


This island is the crown jewel of the Washington State Marine Park system.  It was purchased by many yacht clubs and donated to the parks by them in the '60s.  Located on the northern edge of the San Juans, it is 23 miles from Anacortes.  Services on the island include many trails, campsites, excellent composting toilets, mooring balls, two docks, shelters for gatherings, water (limited and best used for washing UP), and summer time rangers.  There are moorings in 5 bays.  We chose to go to Fossil Bay as that is where the docks are.  It made it easier to get the campers to the sites and since we were ahead of Turon season (Tourists + Morons = Turons) we were able to tie UP arriving near 7:30 PM.  Don't try to come in late in the sunny season.   This place fills UP!  Summer season sees regularly 80+ boats in Echo Bay alone although it can take around 150 or so.  Arrive early for a spot if going.

The concept behind this weekend was to show the race crew of the Mighty Jah Mon how well it does cruising.  As owner, Count Ferrari is aware, his Catalina 42 is a better cruiser than a racer, but endeavors to optimize his use of the hole in the water he pours money into.

The invitation was issued and the date was set but on common consensus we had to let the first weekend (Last weekend in March) go due to inclement weather.  Cold, wet and windy.  Not so much fun.  We rescheduled for April 25-27, 2012.

Lucky's harem:  (He had informed us there were to be 5 ladies joining in and camping with him ashore, 3 were brave enough to attend.

The Rear Admiral was on the boat Thursday night and met with all the next AM, having arranged things well for cruising.  He had taken the extra sails off the boat, the dehumidifier and stashed the canvas and covers as well.  Lucky, Count Ferrari, and Bling all arrived around noon on Friday with provisions and gear.   The harem was close behind with their own supply of goodies.  Last aboard was Polisher as he had put in a good early day of employment and shopping for beer and Rockstar beverages.  At a guess, we filled 9 dock carts with stuff to take to the boat.  The ladies must be complemented on the reduced luggages.  For the three of them they only used two carts.  This included camp gear, clothes, snacks, and booze.  These three are worthy of more boat training sessions.

We had hard intermittent shadows with maybe 10k of wind to start.  The race crew raised sails instantly and we were moving 7k + heading out Guemas Channel, bound for Thatcher Pass.  We eschewed the short route to Sucia from Anacortes in favor of seeing the interior of the San Juans.  There was an ebb tide that convinced us we didn't want to deal with antiwater (current flowing against the line of travel).

What is in a word?

When Count Ferrari was asked for a word used aboard a boat that might be often used, he had no idea what he set in motion!  He was of the impression Shazamber merely wanted to be instructed in the finer points of on board communications.  The initial word nominated was 'AFT'.  All the ladies were paying rapt attention and the Count merely figured they knew they were getting  supreme instruction.  Ahhhh... slowly it dawned.  The synapses under the platinum hair noted an elbow mechanism working on all three girls each time 'AFT' was mentioned.  Soon there were derivatives in use, 'aft'er, 'aft'ernoon, etc....  The first all female drinking game on Jah Mon was established.  OH MY!  There was a lot of l'augh'ter.

We pulled into Fossil Bay and noted the docks were basically full except for the 15 minute loading zone on one dock.  This 25' section of dock was on the end and we managed to fit our 42' boat onto it for the evening with a bit of fiberglass protruding into the bay.  The boat directly astern was Ruby Slipper, a Jeaneau 49 with friend Jim Rard aboard as part of a 3 boat fleet out for an extended weekend.  He had a way cool blue light mounted on his swim ladder.  When deployed under water the critters came and flitted about his light!  Note to owner:  Get one!

The gear was unloaded from the boat and schlepped up the dock to the beach and beyond.  Carts are provided by the parks department. A short exploratory walk was taken to determine which was the ideal campsite.  Of the many campsites on the island, all were open!

Tents were set UP and dinner was served aboard Jah Mon.

A game of cribbage determined who got the guest suite and who got the passion pit (the settee) in the main salon.  Blingster took the cabin over the Rear Admiral.

After dinner, the girls got silly and ended UP in bed early around 10 PM.  It was questionable where they were going to end UP for the night.

The evening was spent with another crib game and we retired around midnight, having done our best.

Hiking began around 10 AM with a ramble out the point and back, over to Echo Bay for snacks and otter watching.  Then to Shallow Bay and the Timex find.  Next a shore walk to the southern bit of Shallow Bay and back to the boat to consider moving it off the dock for low tide.


There was a bit of shoreside exploration.  Turning over rocks to see the critters was a good time for all.  Amber stalked a large river otter with her camera and tried to get him to eat Polisher.  The otter bounded into the bay and started eating eels in front of us to show how little he feared us.


Lunch of sandwiches was served back on the boat featuring hoagies with lots of stuff on them.  A good activity after taking the walk.

The return to the boat was intended to prevent going aground since the tide was to go out enough for the boat to not be floating.  However, it was also nap time.  No one noticed if we ever did touch bottom.  We had calculated, looked online at tide tables, dipped the boat hook to touch the bottom, checked the depth sounder, etc... It just didn't matter enough.

There was only one boat on the dock with us for the 2nd night.  I guess we were just too fun to be around, the other boats went away.

Amber turns into a commercial rock star with a find on the beach.Click here to see the action.


Dinner menu:  Taco salad, made with sliced brauts, lettuce, sweet peppers, grated cheese, beans, onions, and taco chips.  Dessert  was chocolate cake made with chocolate pudding and lots of white icing, served next to the fire.

Saturday night Fire:
The fire was assembled with 8 loads of drift wood.  The salted wood really burns well and quickly.

After dinner was cleared UP, we all meandered over to the edge of Fox Bay.  There was a bit of boat traffic passing by close and far.  JP, our cruising geek, kept trying to spot the freighters that were shown on his AIS app.  He never saw them live, just on the screen.  It makes one wonder if they were even there. 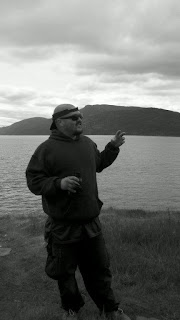 Polisher tended the fire until 1:30AM while most of us retreated to our shelters and a game of cribbage.

Displaying our boating skills:
There was a bit of breeze from our stern so we sailed off the dock with no sails, managed to turn to weather and  raise the main in a  death defying move and proceed to sail out of Fossil Bay.

Once out JP gave instructions to sail to the highest VMG as provided by our handheld Garmin 76CS.
(An amazing tool that is now 7 years old and working great.)  We found a bit of sun and a bit of wind but it still took 5.5 hours to cover the 23 miles.  All good.

We returned unscathed to our slip in Anacortes Marina, emptied all the gear and garbage, cleaned the boat and went home.  Count Ferrari was a tired puppy after his one hour drive home.  "It is amazing that one wears out so much doing so little". (CF)