The notice came saying the Rendezvous would be in a two part installation.  First we would meet at on for two nights and then move the party to Sucia (the premier island in the San Juans).

The weather was August heat in May for the entire week. ‘Severe clear’ weather was the order of the day, every day, requiring sun block all day.  Locals had no idea how to behave, what was this big ball of heat in the sky?

The  RH Marina was gracious enough to float a huge tented platform over to us where our boats were, complete with tables, chairs and extension cords enough to seat well over 50, maybe 100.

Bristol Yachts NW from Oak Harbor was represented by Curt Adams and hosted a magnificent wine and cheese spread.  Curt was very knowledgeable about all sorts of yachts including a 75’ market the Count expressed an interest in.  If you are thinking of selling or buying a boat, this could be your guy.

is a summer destination that has all the amenities and they are happy to see you show up.  The sculpture garden is always a treat with 60+ exhibits ranging from $3000-$75000 or not for sale spread out over 18 acres of trails and pasture.  Disc Golf is the draw for Count Ferrari as there is a great 18 hole course just at the end of the airport runway.  5 of us took in a round playing the holes we could find and all had a great time.

The tent was great for our potluck on Friday night and for the wine and amazing cheeses that Curt brought along.

It was a light turnout but here is the roll call: 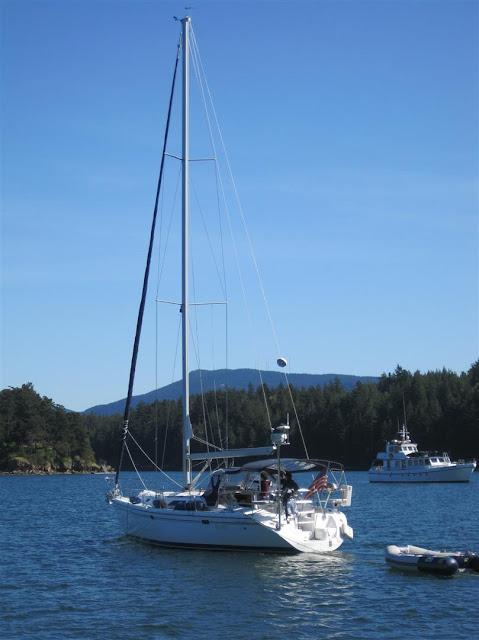 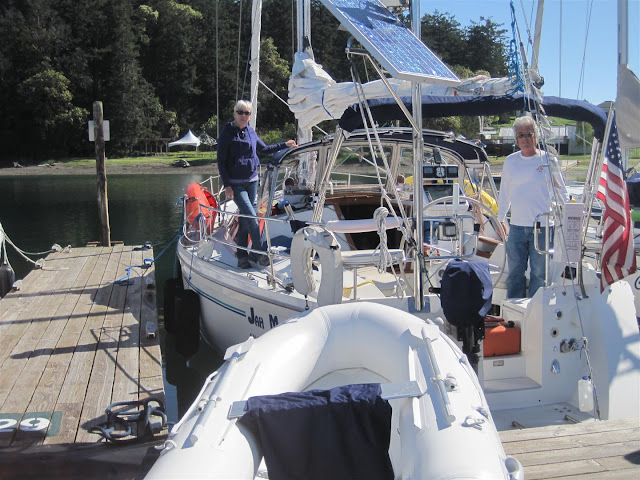 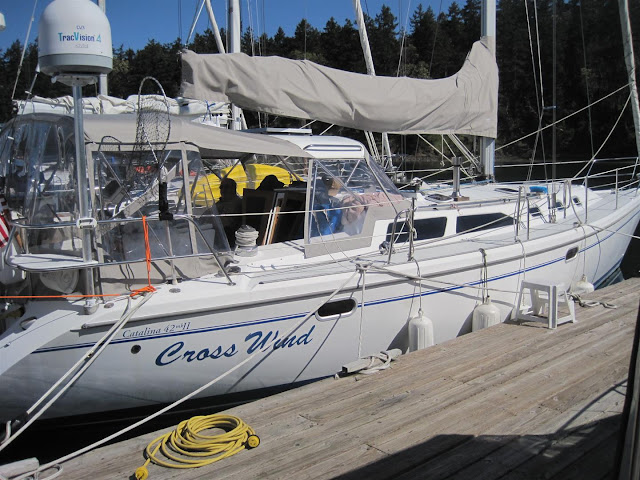 Crosswind: Gary (who lives on his boat in Roche)
DNS 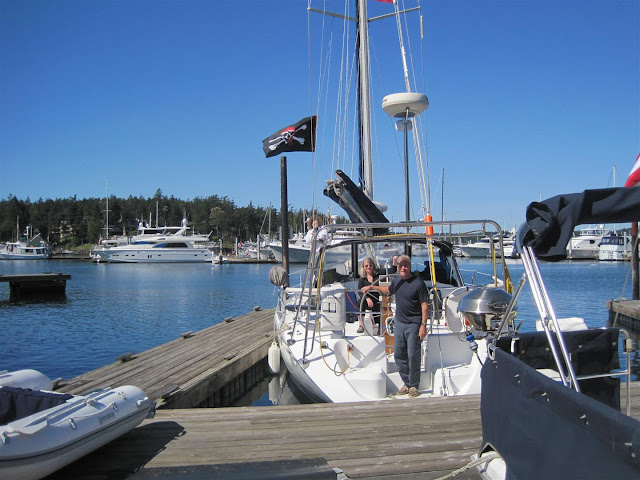 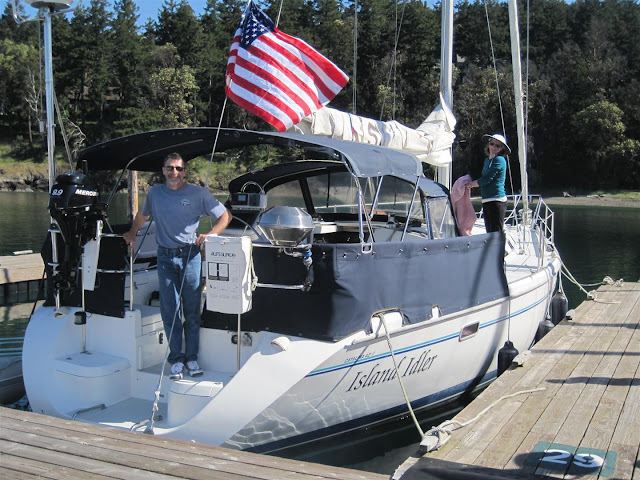 Island Idler:  Colin and Jacqui
155% , fixed prop, towing a dink, Jacqui doesn’t like to tip over

After enjoying Roche Harbor, mostly to ourselves for two days, we left to go to Sucia, a distance of 16.5 km.  Solaria, Jah Mon, Journey and Island Idler left Gary behind on the dock and motored out to the two entrances.  If one leaves Pearl island to starboard there is lots of water and no need for reduced speed but one has to travel 1.4 km further than if you leave it to port and go over some shallows that are close but were not a problem for Jah Mon or Journey (all boats in this race are fin keeled).

We raised our sails in Spieden Channel, more or less together and found light wind in spots which is typical NW sailing.  There was a bit of pro-water with the current taking us in the correct direction at about 1.5k.  Once out of Spieden Channel, Journey went right toward Orcas, Jah Mon went left towards Flattop island, while Solaria and Island Idler took the middle of the course. 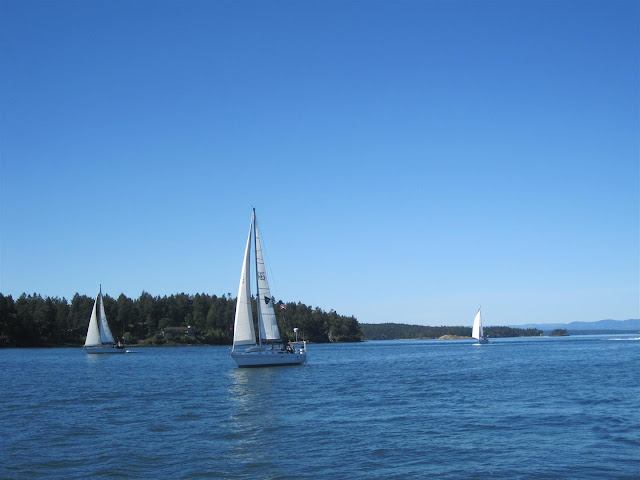 Just after the start taken from Jah Mon.  Left boat is Island Idler, Journey and then Solaria.

Going right to Orcas early was gold!  By staying in the zephyrs going east, Journey opened up a 5-7 mile lead on Jah Mon.  Jah Mon was leading coming out of Spieden Channel but hit a hole by Flattop island and looked at goose eggs on the knot meter for an hour or so while watching the fleet edge away and then all zoom away as they got in the wind over on the Orcas side.

Solaria was on the radio saying they had 9.1k of boat speed through the water while Jah Mon was looking a 0.0 on her knotmeter and 1.5k on the SOG going the wrong way.  It was time for lunch on Jah Mon.

The food brought on a bit of wind and Jah Mon limped over towards Orcas, watching Journey, miles away, being heeled hard over, then seeing Solaria cross by over 2 miles and then Island Idler crossing at least a mile in front.  That order did not last too long as the wind was favorable on the Orcas shore and soon Jah Mon had 8+ k to weather and was short tacking the shore.

It took two tacks to gobble up the boats with the 155% headsails that were a bit large in the 18+k apparent wind.  All the boats were working to weather against the 2k current on our noses, but all were having fun.  A quote garnered from captain Ken Fisher of Solaria said it all, “That was the best sailing I have ever had on the boat”.  His wife, Rita, was of another mind for a bit, saying the boat was heeling a bit much for her at 9k of boat speed but when the speed dropped to 7.5k she was saying “Let’s go faster!”

Jah Mon broke out of President’s Channel and found Journey flogging sails in current chop near some rocks off Orcas Island and they had even furled their headsail to keep the flogging minimized.  Jah Mon was beam reaching, doing 9k through the water and gaining fast.  As the boats got beam to beam the wind filled for Journey and even though they had a bit further to travel to Sucia they had a convincing victory! 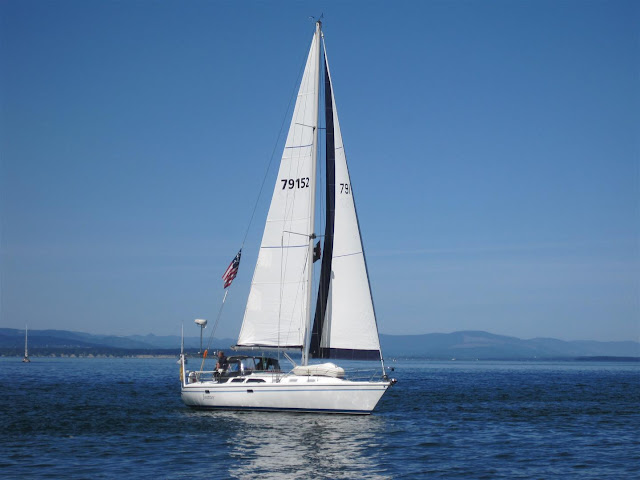 The winner of the fleet race of 2013!  Journey with Andy, Barbara, and Larry on board.

This one design fleet racing is great fun.  NO pro sailors, no trick sails, just mano-a-mano, boat for boat.  As anyone who sails knows, any two sailboats sailing in the same direction are racing.  Jah Mon’s goal in racing is not to be last.  We made that goal but next year the dink is going on the deck! 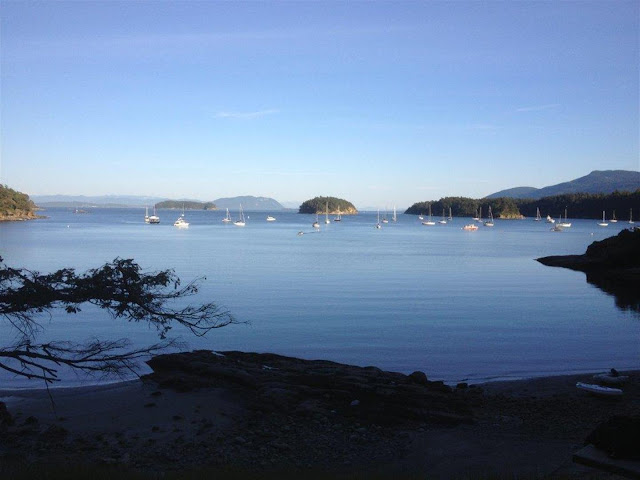 The view from our campfire on Sucia.  75F and gorgeous.  Not too crowded in .

It seems the combined venue selection of Roche Harbor, with a huge tent and tables and chairs just for us and reduced rates of $.85 a foot per night (pre-season rates), then the sail to Sucia was inspired.  Of course the weather was like August with temps pushing 80F and all clear skies.  What could be better?  A fleet of 15 or more C-42s?  See you next year.