The expedition to play disc golf from the boat was a 2.5 week outing.  The boat was Jah Mon, a mighty racing Catalina 42 that was repurposed for deluxe cruising.  The crew was made up of Count Enrico Ferrari (CF), JP, the Rear Admiral, and Sara Jane (SJ), Legs.

The 1994 Catalina 42 Mk 1, Jah Mon, was our home away from home.  Very comfy.  We mostly motored but had a couple good sailing runs that make it much more relaxed than listening to the iron spinnaker (the diesel).  We tried to keep our daily moves under 25 miles and mostly did so.

Departed Anacortes at 1630 on June 17.  Anchored in on Lopez, misty weather
Arrived in and toured the .  Too wet out for disc today.  Motored over and cleared customs at Bedwell Harbor on Pender Island at 1600 on June 18.  This begins our exploration of the Gulf Islands (the BC San Juan Islands).  Caught a mooring buoy in Poet’s .

Headed out the next day to for a run at a new disc course.  Docked and played the very cute 9 hole course.  Easy distances for all.

Motor sailed across to Port Browning on Pender Island that same day and took a taxi to play the .  Walked back to the boat.  Very tired after this day!

Headed to Disc at .  Anchored for 3 hours and then headed north to for the night and to update the Jah Mon signage in the “YC” in Conover Cove.  We anchored in Princess Cove.  Not crowded.

Motored north to inside near the West Vancouver YC out station.  Very windy from the north but the hook held.

Got an early start to transit the Straits of Georgia, 0700 to 1300, beam reaching in 8-20k apparent winds and then motoring in to the False Creek Yacht Club dock.  End tie with all the views!  LOVE !  Stayed two nights.

The over view of our path on Jah Mon

Motored to in Howe Sound.  10:00 to 1400 and found out about the Barnabas 9 and two other courses noted in Gibsons, not played this time.  Nice mooring buoy waiting for us.  Hot and dusty out!

Motored north to look into Smuggler’s Cove and then anchored at of white sandy beach and warm water!  Only 3 boats spent the night and it did get rolly in the early morning!  Left with having breakfast going 3 miles to Secret Cove which was very fine for breakfast, dumping garbage, and getting ice and other things.

We ended up at and took the dink over to to climb the mountain (300’) for the view and build thrusters.  Again a gorgeous day!  Good protected anchorage from the 20k NW winds.

Turning south now, we departed for Naniamo and had to cross the Whiskey Gulf Weapons Testing area.  It was active and several boats had the helicopter warning to “turn 180 and make best speed until exiting the zone!” The military had 3 vessels and were testing torpedoes.

Arrived at the Naniamo Yacht Club and took advantage of the reciprocal moorage getting the last spot on the guest dock.  We took a taxi direct to the course, CF’s favorite course ever, and played a round on the old 18.  CF equaled previous best at +1, JP = +3, SJ = +7 with a ‘double miracle’ 90’ bird shot.

We took another round at for the 18 and were impressed once again.  This course is great and technical.  Too bad there is not a dock here.  Rowing in is good as the mudflats one has to transit when the tide goes out requires picking the dink up and the motor would make it too heavy unless you are accompanied by more than two BIG guys.

was the next disc venue and we were joined by Daughter, AP and Boy Friend, J who had big disc arms but the tree lined paths were a test of skill.  Hart Memorial Disc Course is very worthy!

Our final round for the trip was at where we made the trek of 45 minutes to the course in the sun.  The fields were freshly mown and we didn’t have to walk the road which is a bummer as there is too much traffic.

OVERALL SYNOPSIS
The order and amount of holes we played in 2.3 weeks of bopping about in the boat.

Courses in the NW from a boat.

Our path to from the

Boat access:  Customs clearing is done here.  Arrival before will get you to the front of the line.  After clearing, one can either go to the dock at the resort or anchor in the large sheltered bay.  Note:  This is a upscale resort and will cost you.  An example is buying tortillas and a creamsicle cost $6.50 US.  They do have good stuff and a lot of it too.   The list of amenitees to be found here is immense from spas to fine dining, sculpture park, groceries, etc…

Directions to the disc course:  Ask at the store or hotel for a map of the Roche Harbor Trails.  The walk is 45 minutes to the course up past the water tanks or a 7 minute drive if you take a taxi. There are nice benches at most tees.  Look for a worn trail between holes and a photo of the course map might also assist getting about the course without getting lost.

The course is tight with trees and very garden like BUT a spotter is recommended on most holes or a lot of time will be spent looking for errant throws.  The round took a bit under two hours for 2 of us playing.

JP needs to be documented by getting a 120’ bird on hole #8.  A hyzer shot around a tree and in!  He had a very good round at a +9, soundly beating the Count who scored a dismal +17.  Perhaps the extra G&Ts contributed to the score? 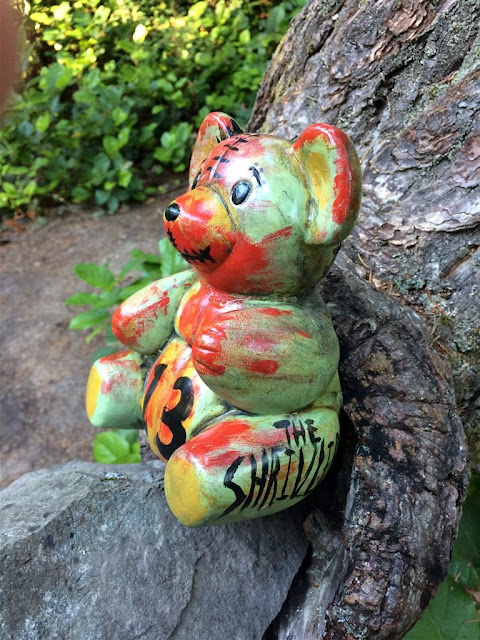 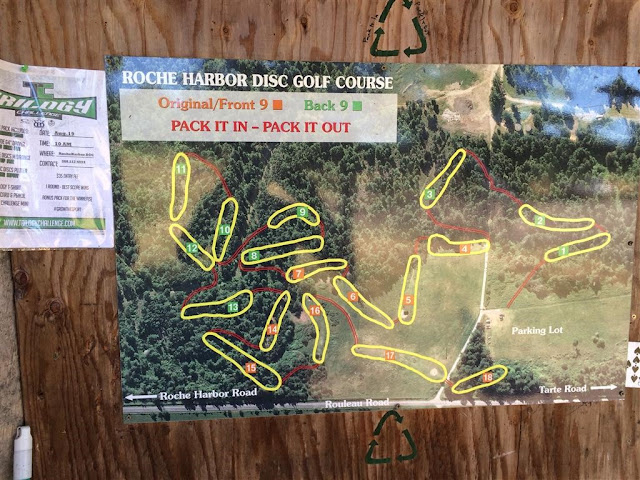 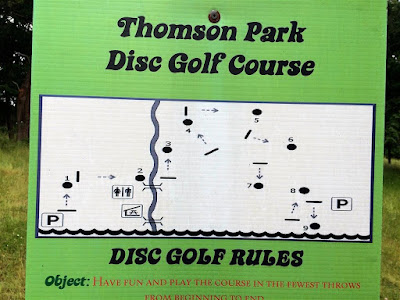 JP and SJ contemplate how to get to the target behind the tree.  Note toe board and tee number signage.
Tonal targets, maybe 14” tall and 4” in diameter.  Appear to be old fire extinguishers.  Good tone when hit. 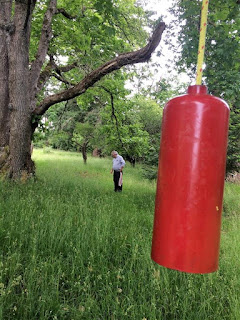 27 holes, 9 tonals and 18 chain baskets
Dirt tees with stone tee boxes
Championship quality disc to be had here with every kind of tree, rock elevation change variation.
Located on top of a hill and is a $20 taxi ride (includes tip) from Port Browning or is a 45 minute walk on the Heart Trail and some roads.  Get local directions
Water available at course
Course map
Established over 30 years.
Nice course decoration on rocks at tees

18 Holes
No map and a bit tricky on 6 and 8 to find the tees.
Chain baskets
Technical, especially the ‘Signature’ hole (12?)
Mown lawn for some holes and nice trails under trees for some others.
Amazing , free to view, (donation accepted box) and tour, ball field, putting green, picnic areas, stairs to beach for dinghy arrivals, parking for cars, zip line, horse shoes.

This park is one of our favorites and has something for everyone.

Photo of the tee location for hole 7: 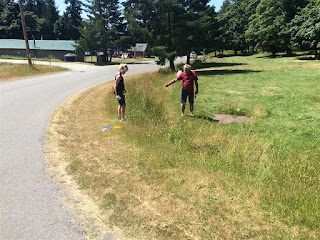 You will need to commit this to memory as the location of it is tricky and not really well marked.  It is near the road intersection turning into the park.


Course Notes:
18 concrete tees and 9 targets
The easier and older 9 hole course features octagonal tees with brass numbers embedded
Targets were chain baskets
Mown lawn fairways
Course Map across a small bridge near the pond and there are two practice baskets there.
Hole one is just above the pond full of lily pads (which one can elect to throw over at great risk of disc loss)

is a GREAT city to boat into.  False Creek YC is under the Granville bridge and our access to the city was very central from here.

Dining out:
Mexican taqueria  was superb
Vietnamese dinner in superb as well
Drinks at the False Creek YC (had live music!)

Course Map located near bridge by the lily pad pond.

Bonus photo of the crew watching a Cricket match at . 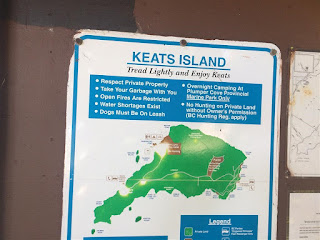 This is a nine hole private course open to the public.  Tonal targets and no tees as of .

No course map but it starts low and goes up hill.  The targets are well marked for sequence.

Located on and a 30 minute walk on a beautiful old growth trail from The Plumper Cove Provincial Park.  Mooring buoys, dock and anchorage space for 30ish boats.

A fine walk on a nicely mown lawn on the grounds of an 80 acre compound.

Note:  There could be a retreat in session with up to 90 guests.  There are 40 staff, a small general store with limited hours.  A treat to see the fancy construction.  All well done and fun to see.

A 30 minute walk through a gorgeous forest trail.
This conference center (not finished yet, 3 years in the build so far) has a GREAT view.  All posts and beams were logged and cut on the estate of 80 acres.

Sara providing scale for tonal targets on course. Note the number on top of target

Chart of Jah Mon’s path from Lasqueti to Naniamo

36@  10’ concrete tees, 18 chain baskets
Longest hole, 650’+
Mown lawn under dappled sun most days.
Lawn bowling(VERY COOL), swimming pool, horseshoe pit, volley ball sand court are all featured.
Course map at hole one at the top of the park, above the pool.
6x6 posts with signage and tee numbers and map of hole at each tee.

Sara Jane hit a ‘double miracle’ 90’ bird!  JP had a ‘miracle’ bird around two trees at 40’.  The Count had some nice drives with a couple ‘gimme’ birds with one putt for bird turning to a dog poo bogie.

Both JP and SJ noted the elevation changes really enhance the course.  SJ notes the ‘tincture’ also assisted in the lift.

Other notes:  A taxi ride was a bit over $10 Cdn up to the course  from the Yacht Club or it would have been a 30 minute walk UP.

Navigation Chart (revisited with some anecdote) :

Our chart for the day wound south around military zone which was active and testing torpedoes.  They sent a helicopter out to shoo off errant boaters a couple times as we scooted through the western edge of the zone un-shooed.

Map of disc course, located on the slight rise above the pool.  Map located next to Hole 1.  There are Blue and White tees.  The tees with the most wear around them are the older and easier holes.  The easier holes are what we played.

The view from Sara Jane’s ‘Double Miracle’ 90’ bird shot.  JP and CF standing next to target.  Her first bird on this course!