The weather was perfect in the low to mid 70s and dry!

NOTE:  There were 4 throwing rings that might have wandered off the course in bags.  IF you have them, bring them back next time.

The cleanup only found 1 cigarette butt and one bottle cap.  Not too bad.

Due to an overindulgence of good times, all the awards were undocumented

These are the few that were saved.

They claimed there would be a questionable upgrade to the trophy.

The Most Regular:  Hawkeye

The Nutcracker:  The Count Ferrari (bee sting and then 3 Benadryl's )

I wish I could Throw award :  Skat

Forget Me Not:  Papabear?

Ace Pot:  Shared out between 3 outstanding shooters.  Eye Rolling on 9, Duffman on 17, and Count Ferrari on 15 with a skip ace! There were some *Aces but they have no value next to a real one.

Attendance had 20 players of all abilities, and two cheerleaders making up the gallery for a couple of the cards.   By a guess, EVERYONE had fun!

The setup, meaning hauling out the chairs, and odd support infrastructure was handled by B' eh! and Jerry Garcia with The Count on the Thursday prior to the tournament.  The practice round by Jerry and Count Ferrari saw a close contest with the Count scoring a -6 to edge Mr. Garcia who finished with -5.  The advantage was lots of practice at the CTP targets.

The takedown, a record sub two hour event by the Count.

The various awards are mostly undocumented as The Scorekeeper had to exit before the ceremony and the usual Master of Ceremonies got stung by a bee and took 3 Benadryl pills on top of his mood enhanced state.  B'eh! managed to stay vertical long enough to make all the awards supported by Hawkeye who is our go to Prize Master.

This video is supposed to play but technology has challenged
the writer of this blog.
There was a buy in for $1.  Everyone throws at the same time until only one disc is in the target.  If all disc miss, all the throwers get to come back for more throwing!
I suggest throwing with power as The Count had his centered disc knocked off by another incoming disc. 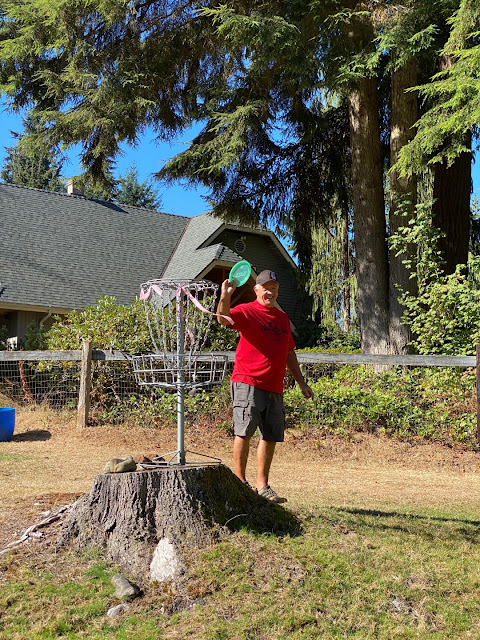 Maybe this one will work?
Rings make it fun!