?About this blog article?

IF you can come up with a comment below. Please leave it.

You may want to return in the future to this article to see the fabulous video that is in the works but not ready for the initial publishing.

As noted this event is held on or near the summer solstice in the hopes of finding good weather.  In the NW, rain has been an issue this year.  A constant deluge has been the usual, keeping the ground soft and the plants growing (except for the crop type plants which are stunted for lack of sun).  June 18 was a Saturday and the day in front of Father's Day which was NOT a good day to get a commitment for disc.

The forecast looked positive a week out, but as the date arrived we found a soaking rain.   WTH?  There were over 30 registered for the event but the weather must have cut into the wussies to get the attendance to a hard core 22 players.

The mist/drizzle/invisible rain (not showing on the radar) stayed with us as we played the first stratifying round on the 10 hole Championship Course.  The fire table and space heater were popular in the sub 60F heat as the entire group got soaked in the wet pastures.

28 was the projected limit for the number of entrants.  Over 30 signed up but 22 actually showed.

At least 5 players new to the course arrived and experienced a fun day along with the 17 who lead the way in having fun.  The flow of Bloody Marys started way before registration and were an event requirement as supplied by B'eh?  He had a couple of acolytes preparing them out of the back of his Suburban now..

There were several long arms (meaning they could throw a disc over 400') and those players had their way with older and wiser who couldn't quite make up that distance (the longest hole is 280').

New Contest:
We had a new putting event called Ring of Fire where all participants stood equal distance away from a target set in the middle of the 'largest disc golf tee in the world'.  On the command 1,2, 3, PUTT, we all threw at once.  This was captured by a phone camera which I hope will find it's way to my computer.
This 3 minute video would be very fun if I can figure out how to make the 'Boomerang?' effect work.  This is supposed to allow the video to go forward and back in repeat mode so the discs all fly in and then fly back to the thrower.
I am hoping that one of you can find this effect and that I can apply it for my blog.
This was a very fun event between rounds!!!  It will be repeated in future events.
A NOTE:
The Best Disc round played on the 18 hole (a pitch and putt short course) saw some VERY good scores but the team that won didn't even get a mention until now.  Waffle Dough and Eye combined for a -19 on 18 holes.  Perhaps this mention will smooth things over a bit.  I am sure the combined age of these two rock stars was WAY OVER any other partnership.  They might be aged but they are like a good aged cheese!
This is now the course record for best disc on the 18 course.
General Discussion:
Registration was done on time (09:30) and the shotgun start at 10:00 came with all players going off on the 10 hole championship course to play a placement round.  After this play, the scores were reported to the Scorekeepers and teams were formed with the best shooter pairing up with the less best.  The sandbaggers in the middle paired up and did gooder.  The teams then went out on the 18 hole course and played a best disc round with some very good scores reported.
CTPs and Ace Pot:
CTP on 4:  ACE Hole
CTP on 7:  Slick Disc (but that is being polite, we all know what he was called....)
CTP on 10:  Duffman
CTP on 15:  Biscuit (who made a HUGE recovery as he was blowing chunks (4xs or more) after inhaling some whisky at the turn).
ACE Pot:  Finnisher and The Miller both hit the White Trash target (#12) for real aces and split the money.
Here are a couple of rare photos of the Cajun the Money Man. 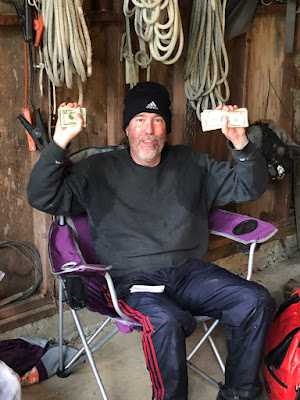 Lost and Found:
There were two very wet coats left behind, almost 4 as Jerry Garcia drove back after departing and got two wet coats left in the clubhouse.
One:  A red Coleman brand rain coat
Two:  A black North Face rain coat
One disc was found on the course on the Jerry Garcia walkway.  Acehole left this one! It can reside in the prize box until the next event.
Awards:

Cleaning up the course:
On the day following the tournament the take down of the course gets done in under 3 hours.  Note the cart with the signage for all 28 holes. 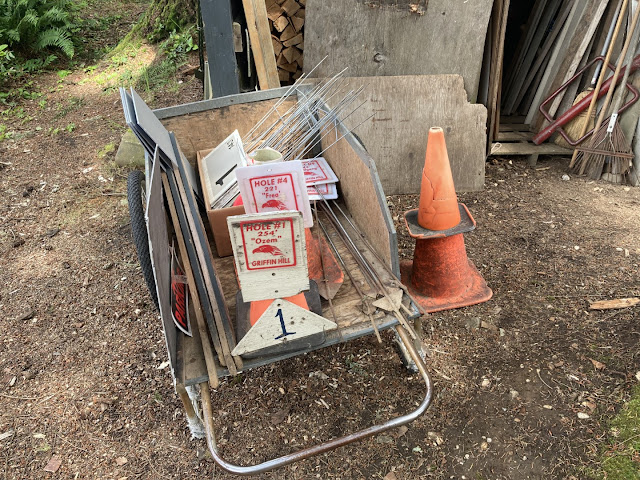