IF you have photos send them to the Count.

Preparation:  There is always the 7 Ps to consider for any activity.  Prior Proper Planning Prevents Piss Poor Performance. When one hosts an event there is an expectation
for success.  The prep work is fun when 5 friends come over and the entire course is done up in a bow in under an hour!  Then a round of best disc on the 18 with scores of -14, -13, and -13 fr the 3 teams of 2.  Pretty even competition, but BA and Bling took it.  I did discover Motor City pizza at Costco for a good deep dish lunch.

Anyway back to the hoping for success.  It was raining hard at 8:00 AM.  30 bodies had signed up and no one else cancelled formally.  Umbrellas were on stand by but by the start time the rain had slacked and rain coats with hats was all that was on the course.  My $10 Costco raincoat served as well as the couple of $400 foulweather coats worn by others.
The weather stopped raining around 11:00 but it started to get colder.   changed to my Jah Mon coat for some warmth.  While the rains stopped the temp cooled.  I think there was a fairly constant temp all day, 40F, might have gotten to 42 with light winds and even shadows for the awards.
The Players:
Success, have I wandered in my prose?  22 players showed up with 2 ladies, Joy and Shelby who livened things appreciatively.  5 of the players had never played here before and all seemed to have fun.  Of course, the food was amazing again.
The Food:
I was tempted by the doughnuts all day, eating 1/2 of a maple bar, then half of an old fashioned with chocolate and sprinkles, then as I put thing up for night there was one half old fashioned with sprinkles left in the box (of two to start!) and I had to do the right thing.  My lunch was crab bisque with a couple bbq meatballs, followed by some mac and cheese with chicken!
The menu included:  Navy Bean soup with ham, Crab Bisque, Swedish Meatballs in BBQ sauce, Mac and Cheese with chicken, all sorts of chips, boxes of doughnuts, deli cold cuts and wraps, cut up fruit, apple cinnamon cake, corn bread muffins, etc... the memory is drawing a blank but there was more!
The Scoring:
Registration opened at 09:30:
Shotgun start at 10:00 for the 18.
The play went well with BA shooting a -13, and Shelby shooting a +12 with four of us shooting a -7, me included in that group.  I had predicted my score and that is always fun.
After scores are in for the 18 hole round, the teams are assembled by the Scorekeeper to make them as even as possible.  The best score on the 18 plays with the less best as a team, playing  best disc golf rules on the10 hole Championship course.
The Play: 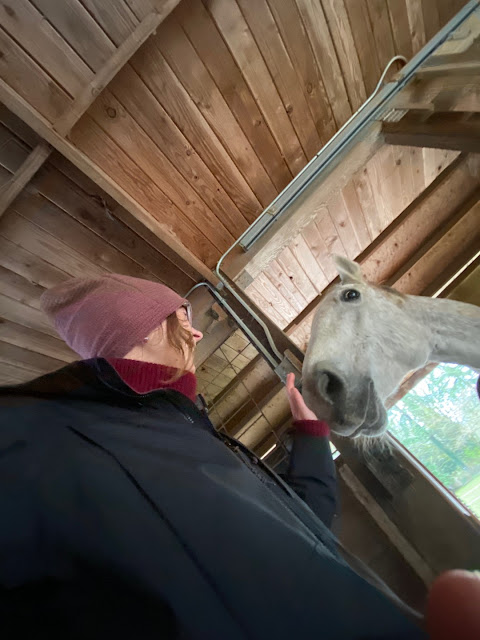 The LOST and FOUND:
The only thing noted on the day of play was Jerry Garcia putting a disc over the fence and not found even though many looked.  Then he texts in asking if anyone found his Seahawk pipe? 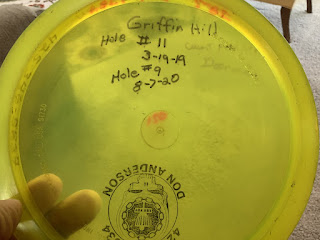 He returned to the scene of forgetfulness 3 days later.  Both were found inside of 10 minutes.  Does one infer the effects of THC on the memory?


The NON award:
A Black Ace is a shot where one is shooting at one target and manages to put it in a WRONG target in one shot.
I have never even seen one in 20 years of playing disc.
On this GHEDI event, Jerry Garcia managed to get, not one but two of these.  Shooting both times from the Largest Disc Golf Tee in the world.  One was shooting for number 18 (the manger target on the side of the garage) and hitting the target for number 10 on the Championship course.  The Count witnessed the shot on the Number 10 target that went into the #18 target!
An honorable mention for the Ace run but not worthy of collecting the money!

The Awards:
The Winners of stuff!
Most Regular:  Jerry Garcia
Skywalker:  (metal sculpture) DVE
Forget Me Not:  The Miller
7th Place on the 18:  Bling
Straight Shooter:  Jerry Garcia
Best Shooter on the 18:  BA
The winners of cash:
CTP #4: BA, CTP #7:  Waffle Dough, CTP #10:  Kyle, CTP #15: Hawkeye, ACE POT: DVE
The awards seem to be very organized as Hawkeye prepared the prizes and DD scored all the players flawlessly.  All I had to do was present them which seemed to go smoothly.
I am still evaluating whether to continue with the Spring event because of the weather issue.  It is always fun in hindsight  but the angst is on.  The summer Solstice GHSDI and the Fall GHEDI seem likely to survive as the weather for those is mo bettah.
Comments are encouraged.  See if you have the computer skills to actually pull it off!
Submitted for your consideration:
Count Enrico Alfredo Ferrari
Posted by Leisure Log at 3:44 PM