Vacations are what one lives for, not another day at work!

Why?  A fair question, but I would point out this repetitive visit  is indicative of previous 'good' experience.

If, as a serious reader and student of leisure, you would like to see what the basic package is like in Zihua town, please see the link below to the blog article from 2011.

Massages with 3 each for both the Countess and the Count from Deisy (Daisy).  It really helped out the Count who had a stiff back on arrival.  She is great even if she might not be 5' tall.  Her technique straightened me out and really loosened me up in a good way!  Only $250 pesos an hour plus tip.  Truly a treasure.  She speaks very fine English and has been in this location for 1-3 years at the back of the El Marlin on La Ropa.  Her sign is out front

We found Jimi playing by himself at the Galleanna restaurant on Friday and Saturday nights from 8-10 PM.
There were maybe 10 bodies at the most listening to this legend from the world of blues.  He has so much fun playing and is so good at what he does we felt totally priviledged to hear him play.

This restaurant is the first one from the 'Lover's Walk' bridge on Madeira beach and directly next to the waterfront museum.

Jimi is now 75 and still going strong!  He has played with Otis Redding, Little Richard, and many others including offers to play with Jimi Hendrix and hanging with Janis Joplin.  He lives in Zihua and has for the past 17 years or so.  He had a club called the Blue Mamou for 4-5 years but it was too much work for his retirement.

He is the only gringo invited to the huge Zacateca Blues gathering in Mexico City.

Paddle boarding and other water sports:

We rented a Hobie 16 for one hour and had fun blasting around the bay.  $300 pesos an hour.  There was only one capsize as we watched for the 12 days.  The guy was rescued by the owner who paddled out in a kayak and righted the little boat for the client.  This is something you should do to see the bay.

We also rented a paddle board from Xavier who has his two Hobie catamarans, kayaks, boogie boards, and whatever you want to play in the surf.  The cost is $200 an hour in pesos, $20 US.  Good fun but we found that one needs to start when the waves are not there.  Try at 11AM and you will be good. (It was hard for us to get to the beach that early as we were on island time for the duration of our visit.)

Mastery of this board took a couple of times out.  Our final test was to paddle a figure 8.  The Countess was able to do this first but we were both able to after our second outing on the board.  Be sure and get a leash for the first day as the Count took a dip backwards and pushed the board towards shore and he had to follow it all the way in as it swam faster than he did.

More swimming than in the past

Swimming was a goal for the Count this year.  He tried to swim two laps around the mooring buoys each day.  The water looked crystal clear beyond the surf break and was 86F.  There were more fish washed up this year than in the past.  Something was killing them but it got less each day.  Lots of dead Puffer fish and Herring.  A 20' turtle also washed up chewed on by something.  Eels and a 30" Candlefish were also seen on the beach.

The vendors kept the beach clean by raking and picking as needed.  There must have been a big deluge just prior to our arrival as there were lots of weeds with roots that must have been flushed out of the rivers and then washed ashore.  La Ropa is still one of the nicest beaches in the world.

Our best meal was the coconut shrimp along with a mixed salad (enough for two by itself and the best salad we have ever had in Zihau) at Elvira's on La Ropa.  ($450 pesos for two).

We ate downtown most nights.  On La Ropa we found El Mangler for the best spinach salad and sopa de tortilla.  The ribeye steak and diablo prawns at Elvira's on La Ropa were excellent and the ambiance was superb.  Sitting on the sand under coconut trees with the stars out, the xmas lights wrapped on trees nearby, the surf less than 100' away and excellent service.  Elvira's in town or on the beach had the best service!

One doesn't have to spend big bucks to eat well down here.  A bowl of soup will fill you UP!  Any where from 30-70 pesos.

We liked eating at the small local places too.  Posole Alley got two visits from us. 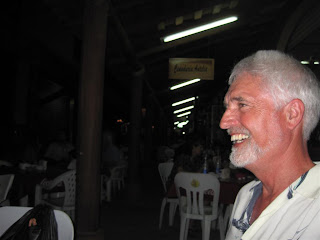 The Count's day on the beach started each day at Elvira's with 'a jugo de mango, frozen'.  Moses, our morning overseer would take care of us and then hand off to Rebe who we knew from last year.

Nahume (sp) (our head waiter from last year) was promoted to manager of the downtown Elvira restaurant and was so happy doing his new job.  He was happy we came to visit him and to have dinner over there 2xs.  We were so well taken care of.

The Elvira service is hard to beat with about 10 staff in each of the eateries.  Good English is spoken by the head waiters and they really strive to please.  The uniform of white shirts and pants makes the staff easy to pick out to signal if something is needed at the table.


The crocodiles were their usual presence at the Playa Linda location. We did a quick count that found 10 of them with 2 crocs  measuring (by eye) over 12'.  The enclosure for these guys included some large turtles in the 16-20" long size and some white egrets.  Apparently they all get along.

A safety note:  We were observing the beasties and as we backed away from the fence we noted a hole in the chain link that the biggest croc could fit through.  This is above a concrete sloped hill they could easily scramble UP!  Watch it.

The 16 km round trip was easy peddling and a worthy activity.  One note, was the Count's bum was a bit sore after all that in spite of a comfy seat.


Shopping was way fun for the girl.

Each night we went into the city for dinner saw a minimum of 30 minutes of shopping for the Countess.

Count Ferrari merely surfed the sights and sounds of the street when confronted with this activity.