This article is being written before the event even starts.

It was finished 2 months after it was done.

This is the first time we have had a corporate sponsor!!  We welcome them to the fray!

This is a  new iteration of the GHEDI (many articles in the Leisure Log about that)  The main difference is this is being held on the longest day of the year instead of teh equal length day of the Equinox as it always had been  held.

The GHEDI has been cancelled since the Fall of 2019 and this date (June 19) has a solar significant event.  The thought was to ease back into the vaccinated population of disc golfers.

Bonus:  The weather is beautiful going from a cold iat night of about 60F to a high about 74F while the rest of the West and MidWest is hovering at or above 100F.  (Sucks to be there)

Photos will hopefully come in from all those cell phones and people who remember to use them for a picture.

For the past two months the Countess has been busy raking the entire estate and seeing to it that myself carried all the detritus to the burn pile and ignited it.

The Thursday prior, we had a work party and 5 eager beavers showed up and the entire course was spruced to the max!  \\

BA brougnt his battery operated (Ego, 56v string trimmer and went through 1.5 batteries) and he basically went over all the tees and various deep bushes that were still standing after I had mowed.

The Scorekeeper came by with his Stihl trimmer and chainsaw on a stick but was diligent in up grading the scoreboards of the past, taking down all the unreadable records of which there were many.

Cajun got all the seating out and filled out the CTP packets.  He and Jerry Garcia got the "So You Think You Can Putt" contest ready for the brave souls who might invest a dollar to lose to .... maybe ME, the Count?

Eye and Jerry Garcia put out all the signage and cleaned up some of the tees..  No small task!

At 12:30 we took a break in the newly assembled clubhouse and had some pizze and chocolate

We played a round on the GH 18.  There is speculation that the Count might be vulnerable now having shot his best in a year... Two ACES and a total round score of -13.  The aces came on #2 with his first throw of the day using his new disc (the Sheriff).  The second one was a money shot if done on Saturday on #10 a CTP hole.

The Count may have used up all his luck.  We shall see.  I wonder if it was the beer I had at lunch?

Scores for the preview round:

Weather on the day of:

It was a cloudy start but cleared to sun around 13:00 and stayed clear and sunny for the duration of the day.

For the first time ever, the GHSDI was sponsored by Parke Investments with a boxes of cool swag, including 15 Buzz discs with Parke Investment labels which are sure to be a collector disc of the future.  IF anyon is interested in having their wealth managed, the Count can say he has not had to work for 16 years as a result of heeding the advice given by Josh Parke.

All the players received something from the prize table and were very happy. 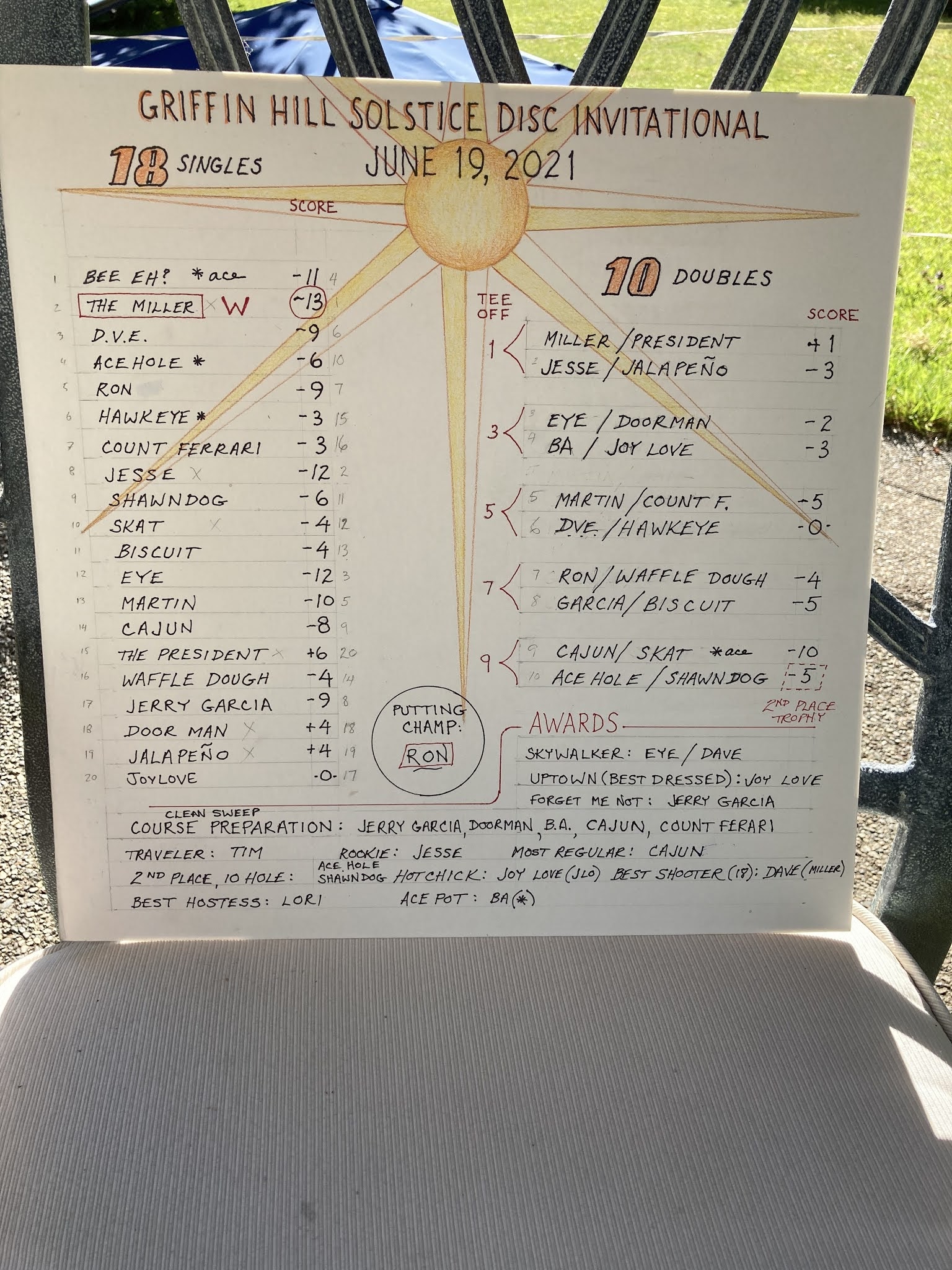 One of the most noted trophies is the Forget Me NOT.  It is awarded to the player who leaves something behind on the course.   The intent is to keep detritus from occurring away from the proper disposal area.

It is very effective as players were out looking for some beer or glass of juice they may have set down and others were looking for the same in order to bestow the award on someone else!  So far, 3 days later, there has been no sign of any foreign substance on the course.  However, in the clubhouse....

Two unlikely items were left behind: (Do they revert to awards for the next event?  Stay tuned) 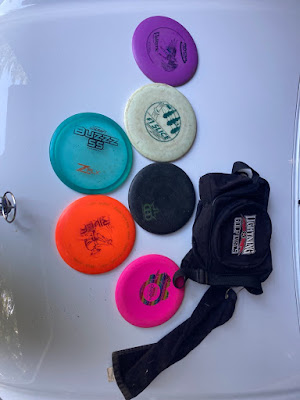 Bag of discs
So far, no one has mentioned who might have left these. 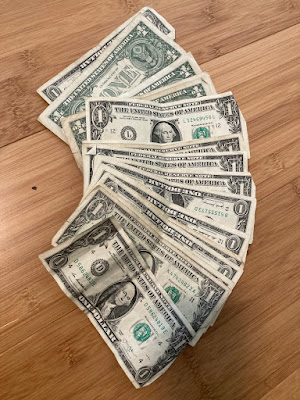 The suspected were contacted to verify who this belongs to and a response was "Did it smell like beer?" came back.  Answer.... NO

20 shooters showed up to test themselves against each other 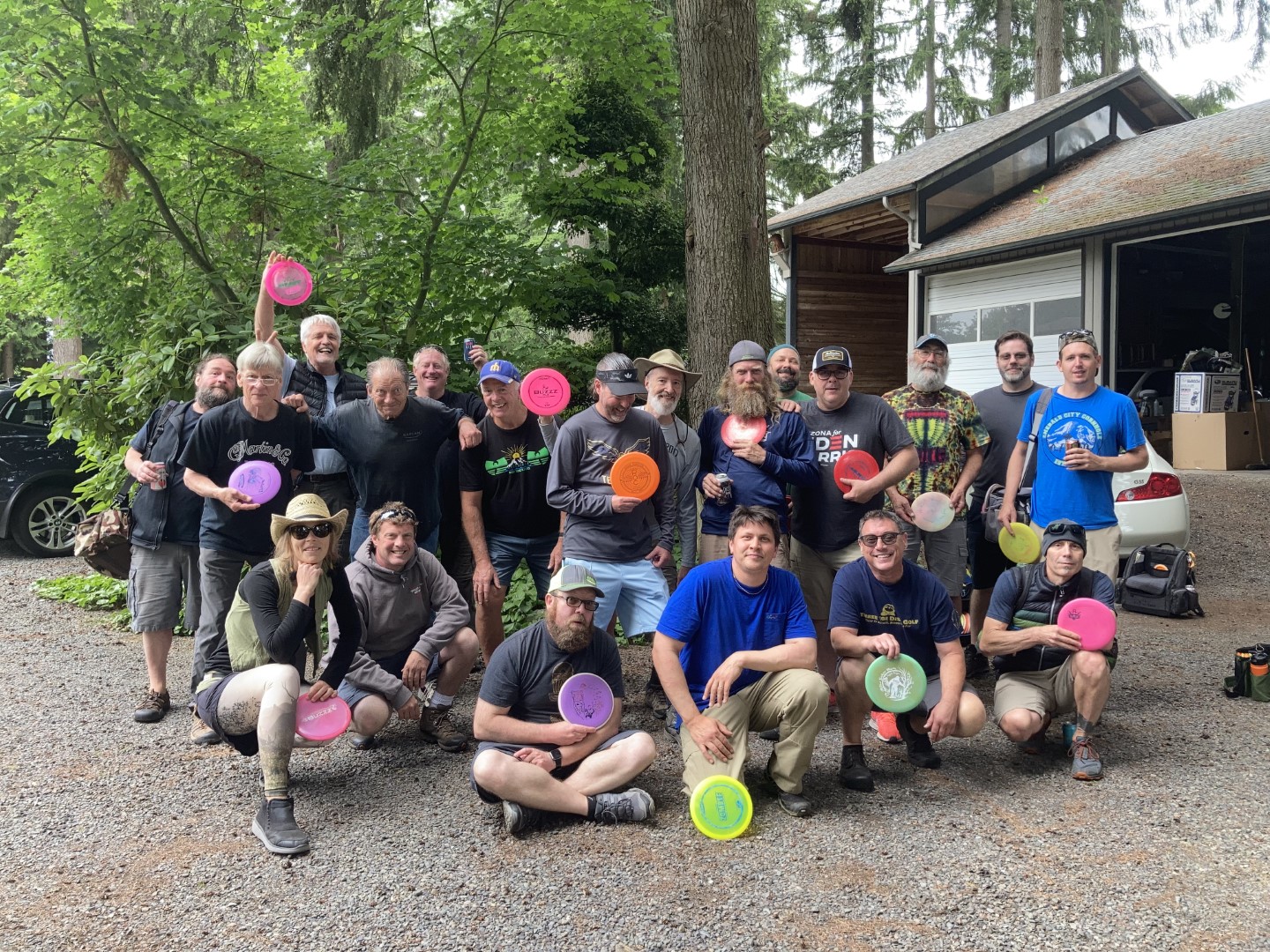 20 shooters showed up to test themselves against each other in the best weather possible.  Welcome back to the course after the Covid Pandemic!

Photos from the course: 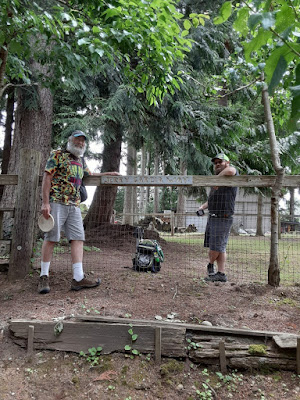 Jerry Garcia and his WAY, watched by Jesse
photo by Hawkeye

Photo Credit:  The bulk of the photos in this blog were taken by JLo!

BA and Dave the Miller watching the Count throw into Hole #5. 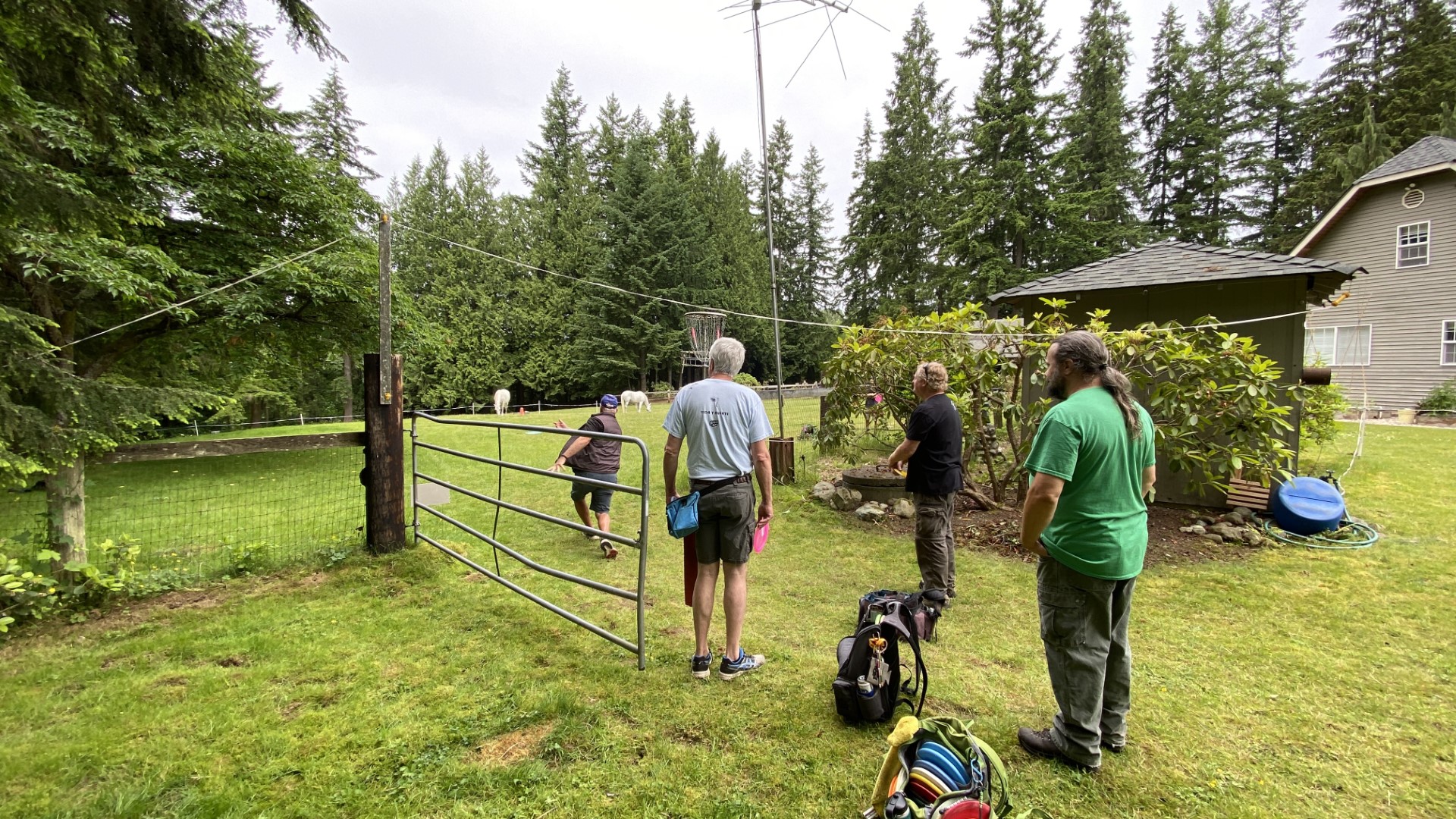 Eye showing his forehand throw on #14, watched by BA, Dave, and the Count 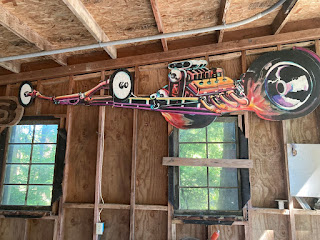 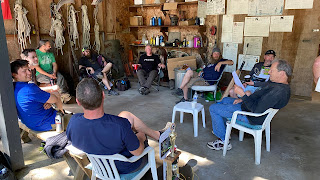 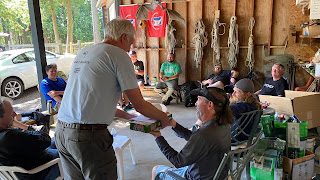 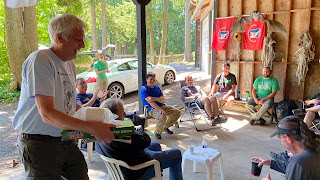 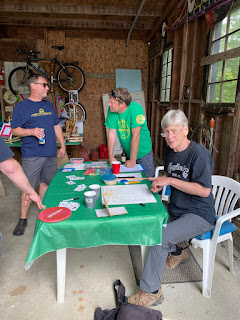 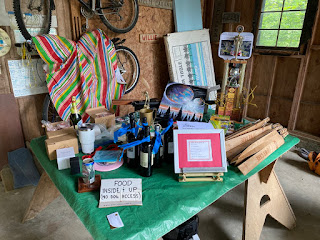 Skywalker:  (Rather be lucky than good) Eye and Dave

Forget me NOT:  (forgotten stuff on the course) Jerry Garcia

Best Rookie:  Jesse (Not sure why he got this as he is definitely NOT a rookie)

2nd Place Award on the 10:  Ace Hole and Shawn Dog