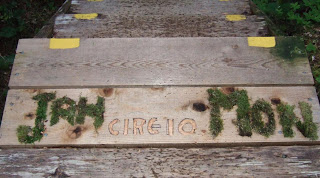 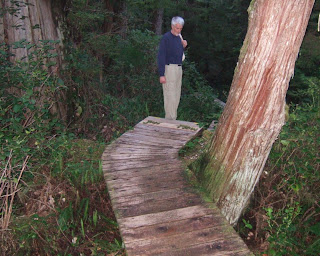 This is the sign CF made for the boardwalk at Hot Springs Cove.  It should last a while as the board was new.  4 hours of carving with a 1” chisel and a 2 lb ballpein  (sp?) hammer.
The moss from the cedar was inserted to give it a head start in the sign.  Here is Count Ferrari checking his handy work.

This was made by Peter Hovey of Trailhead Resort in Port Renfrew a few years ago.  Natural moss is growing just fine.  I used a bit of moss from a local cedar to jump start Jah Mon's sign.  We shall see how it weathers when we get back to the Hot Springs!
Posted by Leisure Log at 8:35 PM