This bit of Leisure Log describes a day's walk in Scotland.  We were staying at a fine B&B (Fasganeon Hotel(sp)) in Pitlochry and took the bus out about 30 minutes to smaller town of Blair Atholl.
Click for Part 1
click here for part 3
click here for Part 4
Thursday,  September 9,2010
Wednesday night saw us taking in the performance of Noises Off, a comedy of a play within a play, at the apparently famous Pitlochry Theatre which attracts actors from all over.  If one does a summer or more at this theatre one’s acting career is pretty well made.  Judi Dench is a former player here as are many others.  The theatre doesn’t have height to raise prop sets up with but does have a railway and turntable on stage that allows the sets to be stored in a separate building with multiple sidings for the 6 productions or more? These  are available to watch each week.  Kiss me Kate was the matinee and then there was an Oscar Wilde for the Thursday evening performance.  Friday saw a Buddy Holly and the Cricketeers tribute band coming which would have been fun but we are traveling that day to Inverness.  There were other productions but I couldn’t remember them all.
Our breakfast at the hotel was wonderful with a Cloudy Bread (pronounced Cloody), eggs, and excellent bacon that was more like thin ham, grapefruit segments and coffee.  Our waiter was a wealth of information and a very fun guy.  The entire Fasganeon (sp) hotel situation reminded me of Faulty Towers without John Cleese.
We just missed the 10 AM bus to Blair Atholl and used the time to send emails from the wifi at the theartre and then get some sandwiches from a local deli, packed up supplies for the 7 mile hike up the River Tilt.  We arrived at the base of the hike at 12:50 and were at the Blair Castle a bit before 4 PM.  The Antiques Roadshow was there and people were queued up with their stuff in big lines after getting tickets of admission.
The hike was absolutely gorgeous going through the huge beech forest next to the river, then through the sheep pastures and glens where we spotted a couple of deer.  The marking of the trail was minimal but the walking chart was pretty accurate.  We were walking along a fine track and noticed a couple coming over the parallel fencing with their dog and found out we should turn there.  If they hadn’t been there we would have missed the turn and who knows when we would have turned around.  As it was we found our bridge at the top of our charted hike and had our lunch in the sun. 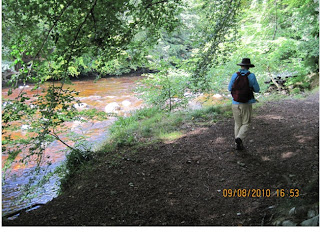 The River Tilt.  It was a very fine trail uphill at a tranquil pace. 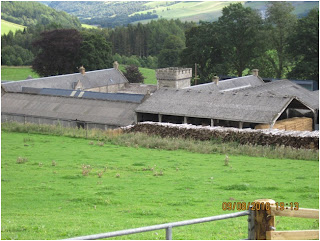 Here is a dairy farm with a castle keep in the middle of it.  I thought this was very different from our dairy farms in the US. 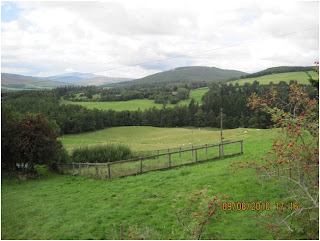 We had excellent views of the Tilt river valley as we hiked up and down.  The sun came in and out and the temperature was perfect for hiking.  We had to open and close many pasture gates as we transited sheep pastures. 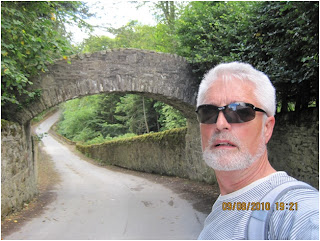 Note the rock fencing on each side of the road.  This is very common and the buses just have to not hit them or the on coming traffic.  The arched walkway bridge shown here is not on a bus route.  Too low for clearances.


We emerged from the Blair Castle within 5 minutes of catching the bus which took us back to Pitlochry (spelled correctly on this missive).  That driver sure had to be good with the massive bus and narrow roads and gates! 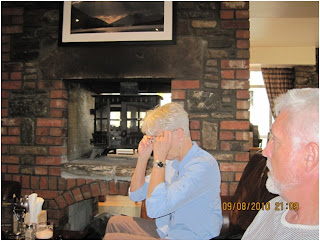 Back in Pitlochry we took in a couple of pints and rested in the leather couches at the pub where we discovered another wifi for free.  A shower, nap, and with computer we returned and listened to live bagpipes, very loud!, and squeezebox, violin, and guitar music accompanied our “Jacketed Potato with Haggis and cheddar cheese with mixed salad for L4.50”.  It was very good food.
Lori and Polly found some 6 oz.flasks with the Scotland Flag for L10 which was the cheapest and will allow us to pack a bit of whiskey for the hikes.  Just a taste for the trails.  They found them at Robertson's Liquor again.  I have a bit of paper with their address should one need to order a case of any whiskey from Scotland.  Many of the locals were telling us about this resource as one of the best in Scotland for whiskey
.
Friday, September 10, 2010:
Breakfast, packing, and then taxi to the train station.  The 10:19 to Inverness was dead on time and we boarded finding a seat with a table on the starboard side of the train (recommended by our waiter for the view side).  It was raining pretty good in Pitlochry but as I type this the sun has come out by 11:00 AM.  The rolling hills and farms go by silently as the rails (60’ long ) have had the joints filled with melted iron filings and then machined, mounted on concrete ties, so there is very little rail noises and the train ride is very smooth and quiet.  Why can’t the US get this together?  Maybe Warren Buffet will change this since he bought the BNSF. 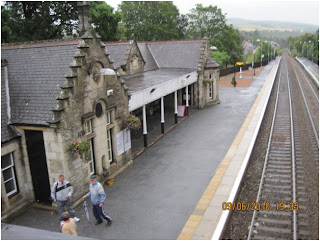 This is a photo of the Pitlochry train station taken from the cross over above the tracks.
Posted by Leisure Log at 5:19 PM