The trip started as a last hurrah for Ed as he is in the middle of a divorce and needed some time off away from it.  He called my cousin Everett, who emailed both myself (Count Enrico Alfredo Ferrari) and cousin Hans, who now resides in Vancouver BC.
After many emails and decisions the trip took place starting on Feb12 and terminated for me on Feb.15.  A dangerous time to be gone since it was Valentines Day during that time period.  Kitchen passes were obtained and we departed. 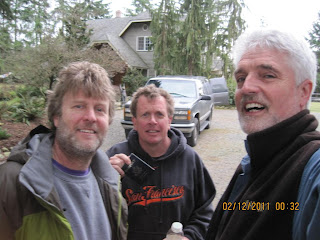 Cousin Everett and rabble rouser Ed Heller came by Griffin Hill on Saturday, the 12th and we headed north from there.  Crossing at the truck crossing to take advantage of the Duty Free booze.  The Count bought a liter of Maker's Mark for $25!  Ed looked at cigars but there were no Cubans there.  Everett already had beer.
We crossed the border after a 1 minute inquisition.  The easiest ever... 3 passports and have fun at Whistler.
We headed for the Vancouver bypass and found a strip mall that looked like it had Cuban cigars and went in. No love.  We were directed to the Mall about 3 miles away (Whiteside?) and Ed got into by noting it was his first time in a Canadian Mall.  He was telling all the cute girls this and getting a full array of reactions from smiles to rolling of the eyes.
The Count also had to make a purchase of a swim suit for hot tubbing apres ski.  The swimsuit shops had them priced at $60-80 and the Bay Department store had some on sale for $17.  A score that was needed.
Ed found his cigars and we headed into rush hour traffic (against it) and made the drive up to Whistler in about 1.5 hours from south of Vancouver.  We arrived about 5:00 PM at our hotel in the Blackcomb Village.  We had reservations at the Mountain Side for a studio loft.  Pricing had our room for $375 each including 2 lift tickets each ($95 each for a retail ticket!).  Our 5th floor (top floor) room overlooked the pool and hot tub with a view to the lift line for the Whistler Gondola.  We parked in the underground heated parking area, schlepped our gear up in one trip using a baggage dolly and settled in for some R&R.
We walked the village a bit and then came to our little suite and made arrangements to meet in the AM.  Hans and Chelsea had skied Saturday and had Sunday to do it too.  Our group was skiing Sunday and Monday.
7" of fresh snow fell that night and we had a great day of sliding.  The Count and Ev snowboarded while Ed and Chelsea downhilled and Hans did his incredible telemark thing on the steep and deep.   The snow up on top was excellent but it really got heavy from the mid mountain down.  It was mixed snow and rain in the village.  The board for the Count worked well but took it's toll on the old legs.  Even switching out to skis after lunch did not recover the energy.
Hans and Chelsea went back to their apartment overlooking Stanley Park and Coal Harbor that night while the 3 amigos went to an Irish Pub for dinner and watched the snow come down.  We had another 12"  on the top of the mountain that night so we really had some deep (knee deep) snow off the groomed runs which had 7-8" on them!  The snow was light and fun.
Ed and I ran out of juice by 2:00 PM and Ev went back up for a couple more and found himself in an "Unsactioned Zone" in a gulley that he had to work hard to get out of.  Never follow Everett into the woods! 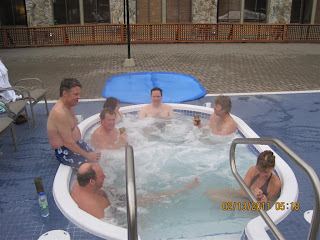 We crashed at Han's place using sleeping bags and mats after walking to dinner in Gas Town and then drinks out.  A nice walk in the AM to the edge of Stanley Park then to English Bay and to a Tim Horton's for Ed's first ever Tim's Bits (donut holes).  Vancouver is a great place to walk about!
We took off to the border and home.  Crossing was easy after waiting 30 minutes in line at Blaine.
A round of disc golf once we got back to Griffin Hill with Ed doing yet another first for him.  He had never played disc golf.... go figure.
A very fun weekend that totally tired out the Count.
Posted by Leisure Log at 2:02 PM