My lovely wife, the Countess, was assisted in our Scotland tour by "C-N-Do Scotland Ltd" <admin@cndoscotland.com>.  They deserve high marks for booking great places and suggested transport. As noted in the blog (the Ft. William one) they kept track of where we were and the weather we were in and called us to make travel suggestions while we were at our B&B!
click here for part 2
click here for part 3
click here for Part 4
Day One:  (September 3, 2010) Travel day  3:00 AM Seattle to 7:00 PM Glasgow the next day!


We arrived in Glasgow after 3 airplane rides... Seatac to Calgary 1 hour
Calgary to Heathrow in England (8.5 hours)
Heathrow to Glasgow (55 minutes)  Changed out money at 1.7 US $ to 1 L (taken a bit by American Express)  Live and learn...
7:00 PM in the dusk with a bit of wind.  We found a bus (L 4.98)  to downtown, 2 blocks from our hotel, a Premiere Inn for the next two nights.
A note about the electrical first.  We had an adapter to fit the strange plugs needed here as I believe it is 220v and our stuff is 110v.  It seems to be working on the new netbook Lori has.  At least there is no smoking or burning odor yet.
The rooms are very nice with a King bed and new and fancy stuff but smallish.  The window needed to be closed as the street below is busy but we are on the 3rd floor with a look at the sky and the streets below.


We crashed hard after going out for a light dinner and managed to stay up to 9:30 after getting maybe 2 hours of snooze on the trip over.


Day 2:  Touring Glasgow by bus and foot
Polly woke us by banging on the door at 9:00 AM and we were both sleeping soundly at that point.  Breakfast in the hotel was much better than average and we are glad to have picked it out as a result.  We are staying here another night on our  return back towards the airport when our trip is concluded.
We got out and caught the double decker (open on top) tour bus with narrative on headsets (supplied).  Our total town tour, good for two days and as many stops as wanted was L 8@ after the discounts.  The retail was L 17.  I guess being old is a good discount.


The only stop we took was a good one.  Glasgow University which was built in 1750 or so and had magnificent old buildings that looked much like Hogwarts in Harry Potter.  We went through 2 museums on campus and then to the Kelvin Grove Museum that was just a 10 minute walk and full of all kinds of cool stuff.
Here is a shot of the Cloisters at the University.  The place was built in the 1750s and was very Victorian in appearance.  Great museums after a bit of a tour bus ride in a double decker with a tour director telling us what we were looking at.  We got a pretty good deal as we were old…  L24 for the 3 of us with a L17 @ usually.

After the touring we stopped in a popular chain pub called Wetherspoons and had three different whiskies.  Glen Moray (favorite and the clearest), Glen Mourangie (next favorite and pretty clear) and Glenfidditch (most colored and strongest bite).  Each was L 1.8   We will do more research.  This was a very welcome respite from the touring as we got a comfy booth and a snack to go with the libations.

The two girls shopped while I watched the crowd go by on the pedestrian street (Buchannan Ave).  We got back to the Inn at 6:00 and then napped prior to dinner.  I think it will be Indian food at the Blue Bombay Cafe.
Day 3 in Pitlochry Scotland (10 miles north of Perth)
The travel day (Day 2) was a good train experience.  We boarded in Glasgow at one of the two large train depots and took a one hour ride to Falkirk.  A taxi took us to the Falkirk Wheel which is an engineering master piece!  If you have not heard of it, then do a google of it.  It was finished in 2002 and lifts floating boats 60’ on a kind of Ferris Wheel with 500,000 litres of water in the rotating troughs.   It costs only L 10 a day to run and is very quiet when running.  Balance is the key to this machine which is slated to operate 120 years without a major rebuild. 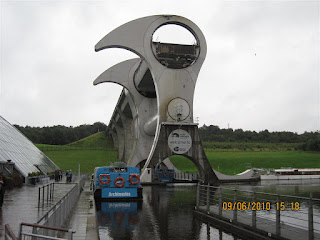 We took a taxi back to a different Falkirk train station and waited about 30 minutes before boarding the train to Perth where we transferred one hour later to the train to Pitlockry.  It was a learning experience on how to say the names of this town.  It was raining very hard most of the day at a 13C temp.
The trains are very nice and not overly crowded.  We liked the two facing two seating with a table between us. We stashed our luggage overhead and enjoyed the very quiet and peaceful travel that was spot on time.  We did error as we boarded the last train from Perth to Pitlockry and ended up in the 1st class car.  The conductor informed us of our error but we didn’t see much to tell us but moved anyway. 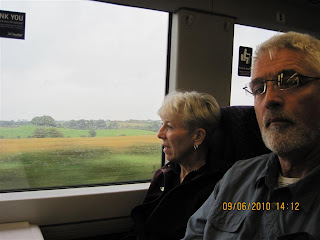 That turned out to be a good thing as we shared a table with a young lady who was from Pitlockry who told us how the local taxis took the kids to and from school and that we would NOT be getting a taxi to our hotel.  We managed the ½ mile trudge with luggage and were happy to  arrive undrenched (a respite in the weather while we walked).  Our hotel was built in 1870 as was most of Pitlockry when the train came to town.  The hotel, built of stone and slate roofed (as are most of the buildings in town is on a bit of acreage on the edge of town, right across from a distillery!  It also happens to be the closest hotel to the world famous Pitlockry Theatre where we bought tickets to tonight’s play, Noises Off, a comedy. 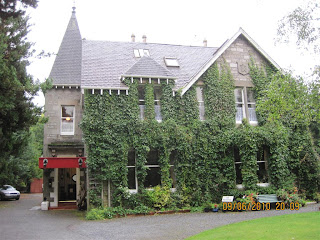 The theatre is gorgeous and has a separate menu for each of the 6 plays that are running at the moment.  We will be passing on the dinner (an extra L22 @) as it would just be too much food, too late for us.   We had Indian food last night which was superb but just too much food.


Cost of food and other supplies:
The cost of food looks the same on a menu that one would see near Seattle, but since $500 = L320 or so it costs more.  The first $500 has disappeared in 3 days and that was just for food mostly.
Our hotel costs include an excellent breakfast which we had this AM (Wednesday) and we set off on our first walk.  Our1st stop was buying our tickets for the play, seeing a salmon ladder at the local dam, and looking at the oldest buildings in Pitlockry from the 1600s.  Our 4.5 mile walk included walking through a golf course (gorgeous), checking out an old graveyard in Moulin, and touring Scotland’s smallest distillery (Edradour) where one could buy a 13 year old bottle of 56% whiskey for L50!  We declined that purchase but managed to buy a bottle of Glen Moray for L16.99.  Smoother and lighter for our tastes.  A better pre-dinner sip for us.  This should help keep the costs down since drinking at a pub is spendy.  A 35ml bit (shot size) cost L3.50 at the train station.

The walk concluded by going by a castle and a 100’ waterfall and then lunch in a pub for the 3 of us which was L15.15 for the 3 of us (included one pint of beer).  Home to the hotel with some leisure log work and then a nap, the girls shopped and came in for the nap part.
Posted by Leisure Log at 9:20 AM